Pichugin Yurii Igorevich (born August 27, 1951 in Tomsk, USSR - died November 25, 2018 in Kharkov, Ukraine) - a Russian and American chemist, a cryobiologist. He was married, had a son who defended his Ph.D, thesis on the use of lasers in chemistry in the United States. 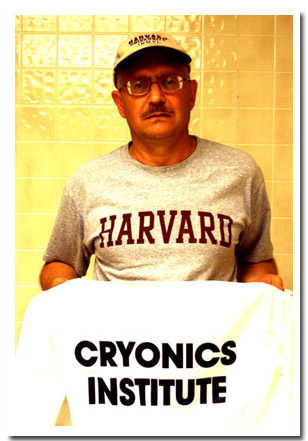 From 1970 to 1976 he studied chemistry at the Tomsk University. During his student years, Yurii read a lot of literature, not only in chemistry, but also in biology, philosophy, psychology and religious studies. In 1975, he openly left the Komsomol organization in protest against the fact that the Communist Party of the USSR ignored the problem of human immortality and decided to devote his life to achieving immortality through cryonics.

In 1994 - 1998 he conducted experiments on cryopreservation of brain and brain tissues of mammals (sheep, rabbits, cats) in collaboration with the  Cryonics Institute (USA). Yurii froze pieces of the neocortex of the rabbit brain with preservation of bioelectric activity for for the first time in history in 1995. Due to this work, he was invited to a research institute of the University of California (Los Angeles) to work at research project “Cryoconsection of rat hippocampal slices” (the so-called Prometheus Project, funded by the US cryonists). He worked there from January 1999 to July 2001.

At that time, almost all scientists argued that it was impossible to successfully freeze and preserve the structure of highly vulnerable brain tissue. In 2001, Yurii Pichugin managed to successfully cryopreserve slices of the hippocampus of the rat brain, but the article on this topic was released only in January 2006. This work became the basis for the creation of the vitrification method of the largest cryonic company Alcor (USA, Arizona).

In the summer of 2001, Yurii started working at the Cryonics Institute (USA, Detroit). Since this company did not have large budget for research, he created a new low-cost vitrification method for the Institute of Cryonics, which is not inferior in efficiency to the Alcor Life Extension Foundation method.

In December 2007, Yurii left the Institute of Cryonics, and the United States. At that time, he had changes in his worldview: he was disappointed in the organization of modern cryonics and in the potential of mankind as a whole. In 2011, he began to work in the Russian cryonics company "KrioRus". Later, when his mother became seriously ill, he left to live with her and take care of her in Kharkov, Ukraine. But at the same time he was a freelance scientific scientific consultant for KrioRus.

He wrote the book "The Earth - the Planet of the Savages?" And essays on the nature of consciousness.

He has over 70 publications, but most of his experimental data and theoretical conclusions have not been published.

He died as a result of a heart attack and hypothermia on November 25, 2018, and on November 28, 2018, his brain was cryopreserved in KrioRus cryocompany in accordance to the cryonic contract he concluded earlier.