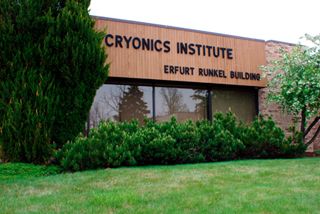 Cryonics Institute is a legendary place for cryonicists, its history is long and renown, and it was quite essential for KrioRus as well as for developing cryonics in Russia to visit it, to see everything with our own eyes. We also recieved important consulting and advices from CI staff in the past and this time wanted to meet them. Help from Andy Zawacki (CI Director, main tech specialist) and Ben Best (CI Director) still remain really important for cryonics in Russia. We happened to arrive to CI at a very interesting time - in 30 minutes Ben Best was about to lecture group of local school students, studying in biological class. When students arrived, we talked our video and photo recording over. It was rather interesting to watch those young (15-16 y.o.) Americans, who were bored first. But later on, when they realised that dewars with cryopatients are right next to them, students became excited, totally interested, and started asking a lot of questions.

Actually, such lectures about cryonics are quite rare, so it was even more interesting to see. We in KrioRus should adopt this experience and also start lecturing. So, when students left, we moved on to Robert Ettinger, who was waiting for us. He lives near Cryonics Institute in a small clean and cozy house. He's rather old and had difficulties with hearing and self-sustained movement. But nevertheless, our meeting was mutually pleasant. We presented Mr. Ettinger with collage of KrioRus photos (same as we presented to CI, by the way). Robert Ettinger signed two copies of first edition of his book "The Prospect for Immortality" - one for russian cryonicists and one for Directors of KrioRus. From this very book in 1964 started crionics.
We made a preliminary agreement with Mr. Ettinger about using his texts in a new book about cryonics, which we intend to publish in Russia soon.
After about an hour we came back to CI and started communication on our tour. There's always a lot to talk about with colleagues, united with common business. This day and on the next day we spent about 10 hours in CI - we carefully examined dewar vacuum system in every detail, visited cryofacilities, watched many photos, asked a lot of questions, and then asked questions again and again...

We took a close and detailed look on world famous dewars (which fellow brother is installed in "KrioRus"), carefully examined computer-controlled cooling devices, perfusion systems and support equipment, as well as security system for dewars and building. We recorded great amount of information, which we are going to implement it in "KrioRus" in the nearest future.

It's worth mentioning, that all CI staff were cincerely demonstrating hospitality and kindliness to us. We were also presented with "Cryonics" and "Long Life" magazines for our library (we had such gifts from "Alcor" too, though). We promised Ben Best, that we'll write an article for "Cryonics" magazine about our trip and visit to CI.
Once again, we would like to express our gratitude for a warm welcome and hope for further cooperation.