Because the unprecedented slanderous PR campaign that began on 9th of September 2021 against KrioRus by Dmitry Medvedev, the company’s CEO Valeria Udalova’s ex-husband and one of the minority co-founders of KrioRus LLC (TIN 7721554738), KrioRus LLC makes the following statement: 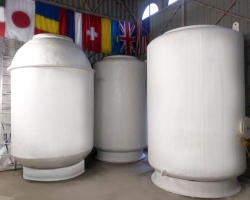 Mr. D. Medvedev claims in the media and on the Internet that V. Udalova allegedly stole (personally from him) the Anabios-1, Anabios-2 and Anabios-3 dewars. This is a lie and slander. In fact, on the 7th of September 2021, we began to carry out the scheduled transportation of KrioRus equipment, including Anabios-1, Anabios-2 and Anabios-3 dewars, to our new scientific cryonics center which is being constructed now. We have a valid lease agreement with the owner of the site which gives us legal rights to access the old storage facility in Sergiev Posad and the piece of land under the storage facility. Besides, the building belongs to KrioRus LLC.

However, when the loaded cars left the site, D. Medvedev and his accomplice, the son of the site owner A. Samykin, called the police, who stopped the transportation and ordered the dewars to be returned to the old cryonics storage facility until the circumstances of the case were clarified. Because of these actions of D. Medvedev, we filed several applications to law enforcement authorities about opening cases under articles on false denunciation, forgery of documents and other illegal actions on the part of D. Medvedev and his accomplice.

Also, D. Medvedev claims in the media and on the Internet that there was a forgery by V. Udalova of one of the signatures on the documents when the Charter of the company was changed in 2017. This statement is also a lie and slander. We would like to show you D. Medvedev's approval of the actions of V. Udalova, which he sent her in Telegram on the 21st of December 2017 shortly after the registration of changes in the Charter and the legal address, and also explain that such cases are usually resolved within the organization. If D. Medvedev is confident in his righteousness and if he believes that the change of the legal address and the bringing of the Charter in accordance with the constantly changing legislation somehow caused him damage, he should not slander in the media, but go to court, which will help deal with this situation.

In addition, in the media, D. Medvedev slanders that allegedly Udalova V.V. has some connections with the Italian mafia. It is also a lie and slander, originated from the fact that the KrioRus does have an Italian representative, but he never had any connections with the mafia, as D. Medvedev knows perfectly. Nevertheless, D. Medvedev disseminates this false information. We will separately file an application to initiate a case against D. Medvedev precisely for this slander, defaming not only the image of Kriorus, but also the honor and dignity of our representative in Italy. We believe that cryonics is a very long-term endeavor, perhaps hundreds of years, and we do not want and cannot have connections with an unstable and dangerous criminal world.

D. Medvedev also spreads other myths and lies associated with the storage and transportation of cryonics patients. He does this in order to discredit cryonics and our company KrioRus. Perhaps the reason for this slanderous PR campaign lies in the fact that D. Medvedev (economist), as well as A. Samykin (historian) and their accomplice D. Kvasnikov (programmer) opened their own company named Open Cryonics a few months ago. Perhaps, having unleashed this informational war and trying to appropriate our equipment, they want to get some preferences and assets for a new company.

We also found out that D. Medvedev addressed the media with a statement that allegedly, having waited him at the door of his apartment, at night some people threatened him and said that it was the “first warning”. D. Medvedev connects this with the ongoing police investigation regarding the ownership of dewars, but we declare that we do not know anything about this incident. Of course, we did not invite any third parties to resolve this conflict and rely in its resolution only on the law enforcement authorities. We believe that cryonics is a very long process, cryopreserved people need to be stored for a very long period, and therefore we on principle do not use any dubious and illegal methods in our activities. We sympathize with D. Medvedev if someone made a claim against him on some other matter, but we emphasize once again that the KrioRus company, as well as its director V. Udalova, have nothing to do with this.