The 57th cryonics patient becomes the success of CryoGen ICO and cryonics.

On 9 January 2018, we performed the cryonic suspension of our 57th patient. We are very proud of this case, because, in fact, by performing it, we have fulfilled our obligations to the very first investor of our CryoGen ICO.

This investor, let's call him A., came to us almost immediately after the start of CryoGen ICO. He was interested in the significant discount that we gave to the first investors. His mother had cancer and, unfortunately, the prognosis was deplorable. We were both glad to help a person and to get the first investment. Since then, we have raised quite a lot of funds for our project, but always remembered our first investor with gratitude.

Unfortunately, 2 months later his mother's condition seriously deteriorated. We were notified of this in advance and the deterioration of her condition dramatically progressed during the New Year holidays. It is a very difficult time for performing preservation, like any holidays. Nevertheless, we did everything we could and were completely ready.

When the situation became critical, we were constantly in touch with her son, monitoring the patient's condition. On 8 January at 2:00 am we were told that the situation was very bad and at 3:15 am the mother of our first investor died.

Everything happened near Moscow. By that time, the ice for primary cooling had been already prepared at the patient's apartment. We also stored some more at the apartment of one of our volunteers nearby just to be safe. The procedure could require a lot of ice and the usual freezer was not enough.

This case was complicated by the fact that the police attempted to illegally send our patient to a forensic medical examination. Of course, there were no grounds for it.

In such cases, we never surrender, so we took great efforts to ensure that this illegal act was not committed. It required a special effort, but everything ended successfully. We will separately highlight the situation when, in violation of the Federal Law and the Constitution, policemen try to send the body of a deceased person to a forensic medical examination without any justification. We do not know how widespread such a bad practice is, as we have never encountered it before.

In the end, everything turned out the way we wanted. Despite this delay, when we started the perfusion 15 hours following death, the condition of the circulatory system was very good. There were no blood clots. It was due to the fact that from the very beginning the body of the woman and, particularly, her head was subjected to intensive cooling. During the procedure, we introduced heparin, a blood thinner.

The client was surrounded by packets of ice and cold water which were constantly replaced almost all the time, which gave us the opportunity to gain time, we needed to solve bureaucratic issues.

As a result of this difficult operation, we performed a perfect perfusion and the brain of the patient, which is now in the storage facility, was thoroughly perfused. That means that the cryonic suspension was performed at a fairly high level.

This situation gave us new experience and tested our team for endurance and ability to solve complex issues. We are proud of our results and our employees. Also, during this perfusion Ivan Stepin, Deputy Director of KrioRus, for the first time acted as a chief surgeon. He has studied the surgical part of perfusion for 2 years and perfectly performed the connection to the circulatory system.

We are also grateful to the relatives of our patient for their psychological endurance shown in a difficult situation and for helping us solve complex issues of interaction with the police. Now, another life has a chance of salvation, another person has a chance to avoid death, which before seemed inevitable. It is the miracle that cryonics has brought to the world.

Besides, this case has another aspect. As we fulfilled our obligations under the contract that has been concluded under the CryoGen project, we can affirm that CryoGen fulfills its obligations and benefits investors even at the pre-ICO stage.

This amazing and quite a unique moment in the ICO world probably will be inherent in various ICOs from the real sector. Perhaps, we are the first to implement it and draw the attention of the crypto community to it.

So, we can conclude that KrioRus performed this cryonic suspension in a difficult situation with which many would not have coped. We are proud of it and will continue to fight for lives of people. The obligations under our CryoGen project, which is in the pre-ICO stage, to our very first investor have been fulfilled ahead of time.

We hope that when our investor recovers after such a difficult situation, he will give an interview and tell about his investments in ICO and his attitude towards cryonics, CryoGen ICO and KrioRus in detail. The only thing we can say about him now is that A. is a businessman from Russia, he is a specialist in the field of artificial intelligence and owns a company in the Silicon Valley in the United States. 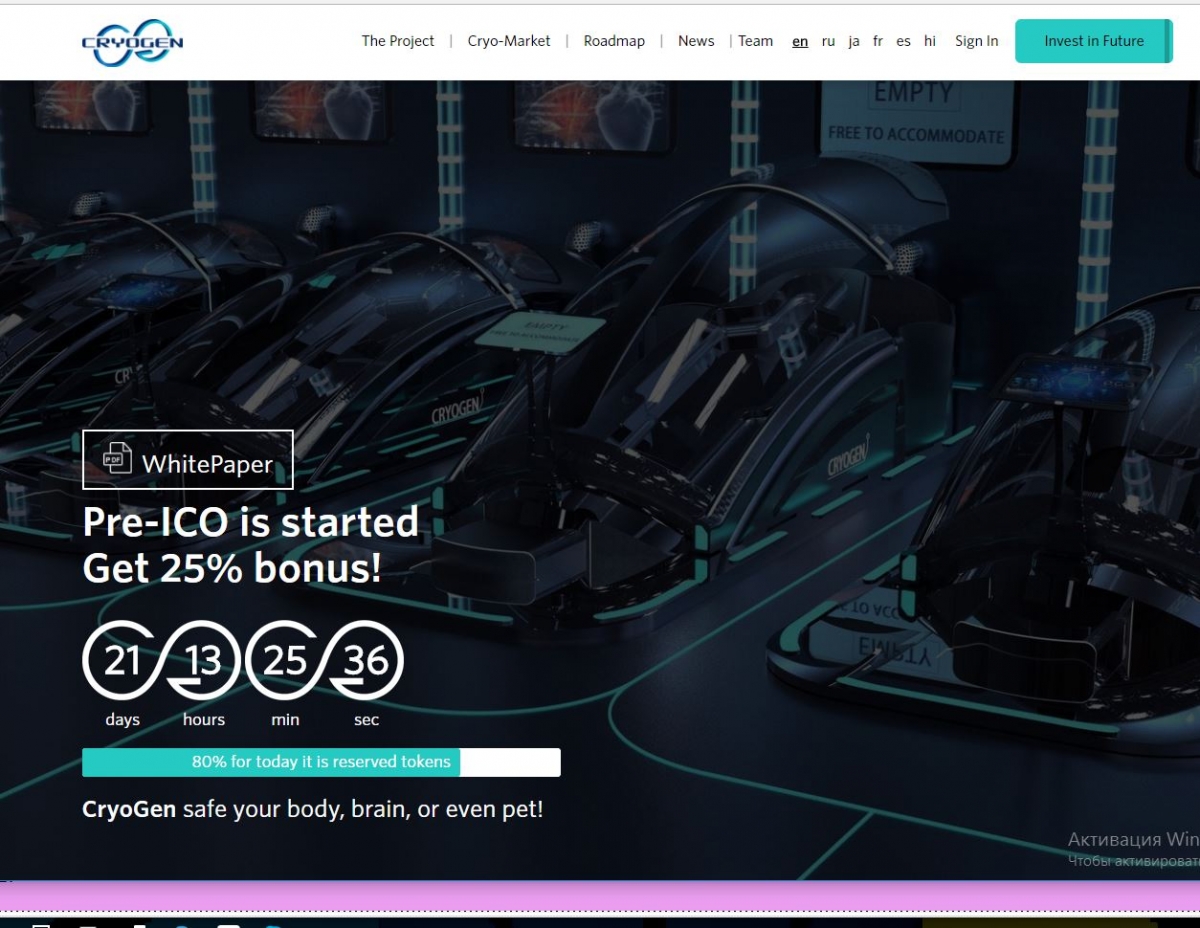