50 years since the first cryopreservation! 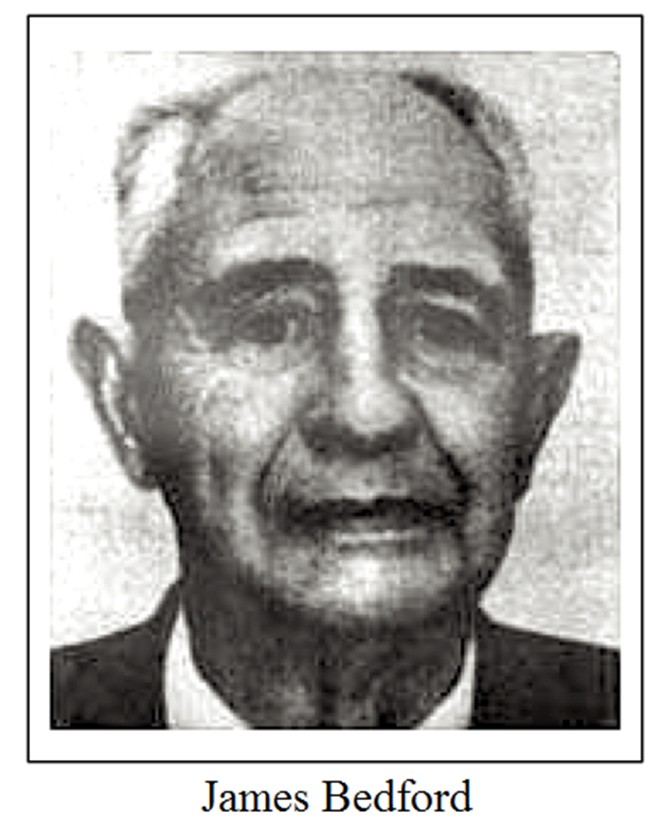 The first person in the world to be cryopreserved on January 12, 1967 was a University of California psychology professor James Bedford. He became the first cryonically-suspended patient, that is a man sent at the time of the legal death into the future by means of ultralow temperatures.

With that event began the practice of cryonics. By today it has become a recognized, albeit still quite rarely used technology. Like other radical interventions, such as face transplantation, artificial heart installation or organs being grown inside of chimeric animals from the patient's own cells via cloning, cryonics gives hope of saving lives in the most extreme cases where conventional medicine is powerless.

By now, approximately 370 cryopreserved human beings and at least 200 animals can be counted in all the world. Two major cryonics companies operate in the United States – Cryonics Institute and Alcor. The world's third-largest organization is a Russian company KrioRus founded in 2006 has recently cryopreserved its 52nd patient.

There are only three people remaining alive who were born in the 19th century. The Italian Emma Morano was born on November 29, 1899, while a resident of Jamaica Violet Brown and Japanese Nabi Tajima were both born in 1900. James Bedford, born April 20, 1893, in case it becomes possible to revive him, will be the man who was born before anybody else living on Earth!

Suffering from an incurable kidney cancer with metastases in the lungs, Bedford responded to the offer of becoming the first cryopreserved volunteer in 1965, and his candidacy was approved. Cryopreservation was performed in Glendale, California on January 12, 1967. Bedford's bequest of 100 thousand US dollars was granted to support further cryonics research. This case was reported on February 3, 1967 in "Life" Magazine.

Now he is stored in Alcor, one of the leading American cryonics companies. While his body was moved to a new cryostat, it's external condition was analysed. It was confirmed that the required temperature had been maintained all the time and the condition of the body had not changed. Scarlet incoagulated blood, no signs of decay suggest that cryonics succeeded in preserving the body of the first cryopatient unchanged.

Now remains the entire objective of cryonics, the revival of the cryonized subject organism. Experts estimate it could happen even earlier than in half a century from now, which means, so optimistically, that Professor Bedford is already half way to revival. Interestingly, Bedford's relatives were not cryonics supporters, but the will of a dying person remains sacrosanct.

In Russia, a well-known biophysicist was the first to be cryopreserved in 2003. Relatives decided to keep the patient's name private. And the first Russian cryopatient whose name has become publicly known is a math teacher from St. Petersburg Lydia Fedorenko, who asked her daughter and grandson to cryopreserve her. Her brain is presently stored with KrioRus.

In 50 years, cryonics has come a long way. Indeed, cryonics has significantly influenced medicine and other life-saving technologies. For example, medically induced hypothermia was developed in Alcor in 80s under the leadership of the former Alcor director, resuscitation specialist Mike Darwin (Federowicz), who is now one of KrioRus founders. Cryoprotectants for embryo vitrification used worldwide for IVF, were developed by renowned cryobiologist, head of "21st Century Medicine" research company, Gregory Fahy.

Great interest in cryonics has arisen around the world, especially in recent years. Not long ago it was reported that a new cryonics company was founded in Canada. Several projects are now being started in China. Creators of one of them were advised by KrioRus. There is a great interest and demand for cryonics development in Europe. But building any cryonics infrastructure for 26 countries will be very difficult. Prior independent attempts in Germany and in the UK have failed. Now KrioRus is helping interested countries to form European association of cryonicist groups and to create a single cryonic service to coordinate provision of cryonics assistance.

In general, cryonics has existed as a cornerstone of transhumanism, the movement for human improvement, including the extension of human life. Therefore this ideology has risen to the attention of scientists and clergy alike. The strategy of convergent technology development proffered by the Russian Academy of Sciences a year ago is based upon Transhumanist forecasts. And Patriarch Kirill admited the expansion of Transhumanism in his speech on 20-th Russian national "Sobor" meeting. James Bedford's choice blazed a trail into the future for generations to come, still dying from aging and disease. Bedford's example has become a symbol of hope and faith in possibilities of scientific and technological progress, growing in significance, year by year.

Being interested in the future, James Bedford published an article Your future job: A guide to personal and occupational orientation of youth in the atomic age. Society for Occupational Research, 1956

Сryopreserved humans and animals statistics in different cryonics organizations as of January 12, 2017:

We also know of several people being preserved in separate, specially designed storage facilities around the world, for example, in Dresden (Germany) and in Brazil. An estimated 370 people are currently cryopreserved.

It is known that the first major article on human cryopreservation was first published in the "Life" magazine on February 3, 1967. The editors planned to post this story as the main article. But on January 27, 1967, a month before the scheduled start of "Apollo" program, the whole crew that was preparing for a landing on the Moon died in a fire accident during training. Already partially released, the magazine's issue was changed and, in particular, the cover has been replaced. According to some cryonics historians, this fatal coincidence prevented cryonics from being accepted in the US as quickly as it might have been otherwise.

COVER 1: Bahamas resort from air with red dice (RARE). This cover appeared with the main article "Fantastic Mission to revoke death - body of California professor Dr. James H. Bedford has his body frozen for possible future revival - the first cryogenic internment, Cryonics Society of California." Or with the main article about the death of 3 astronauts. The main topic was suddenly changed prior to cover printing. 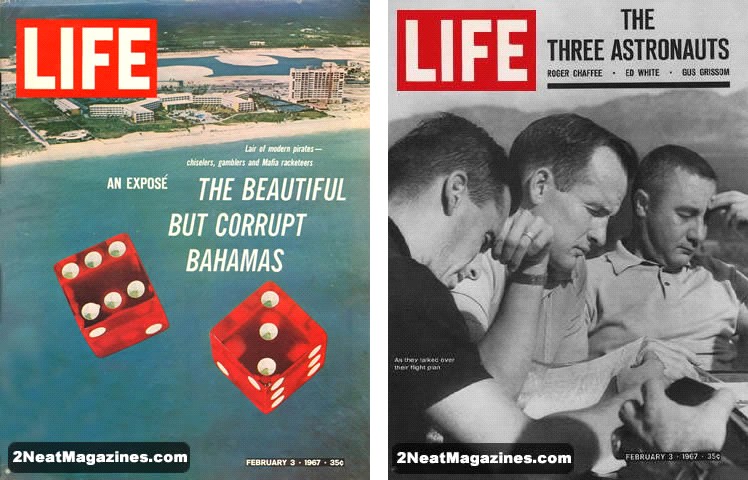