The story of Tenderness 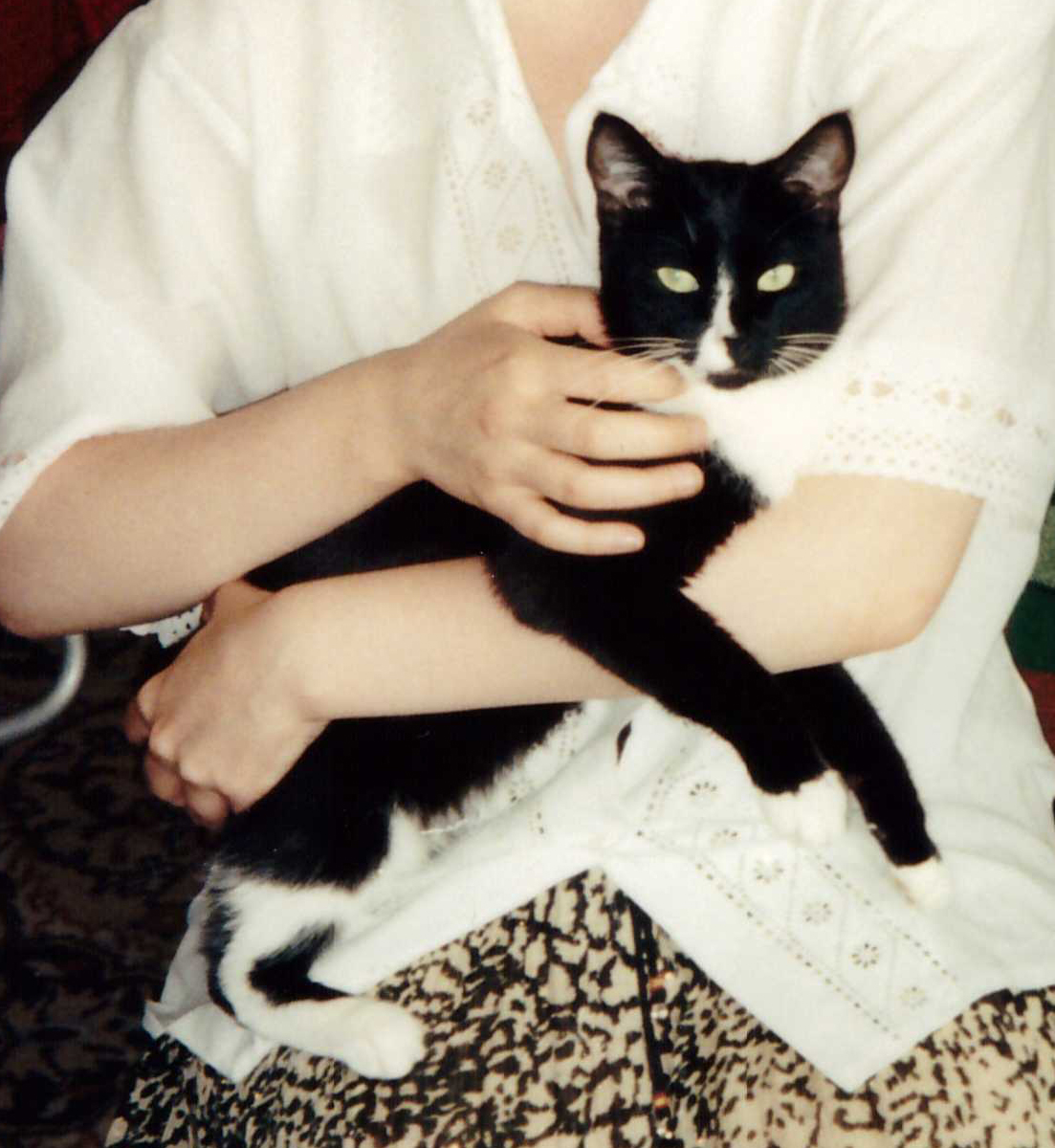 Laska means ’tenderness’  in Russian. Laska was born early in the morning on 12 April 1995. I was 15 years old. The birth of kittens from our cat Casya was my idea. To father the litter I chose a strong and intelligent Siamese cat who lived at my mother's colleagues’ house.

The birth went fairly quickly and without problems. Laska was born last, as I recall,  the smallest in the litter, feeble and very ugly at first sight - with irregular white spots and a curved stripe on the nose, with short and harsh chocolate hair, skinny, with long legs and tail, and large pointed ears.

The nest was arranged in my room, and so I  was privileged to bear with the sound of scratching and purring, to earsdrop on  conversations between Casya and her kittens. And when the cat started to hide her offspring, I often woke surrounded by kittens. The most important thing in this situation is not to move, to locate the heat sources,  and then, before rising, to bring them gently within sight without crushing them.

And then miraculously one kitten, seeing my face looming,, was dropped from suckling at her mother’s belly, and on unsteady legs  came closer. This one kitten never hissed at the fingers playing with him, and quickly learned how to play bite without actually nipping me. Nevertheless, fingers were often covered with scratches. We called the little princess “Scratchy.” 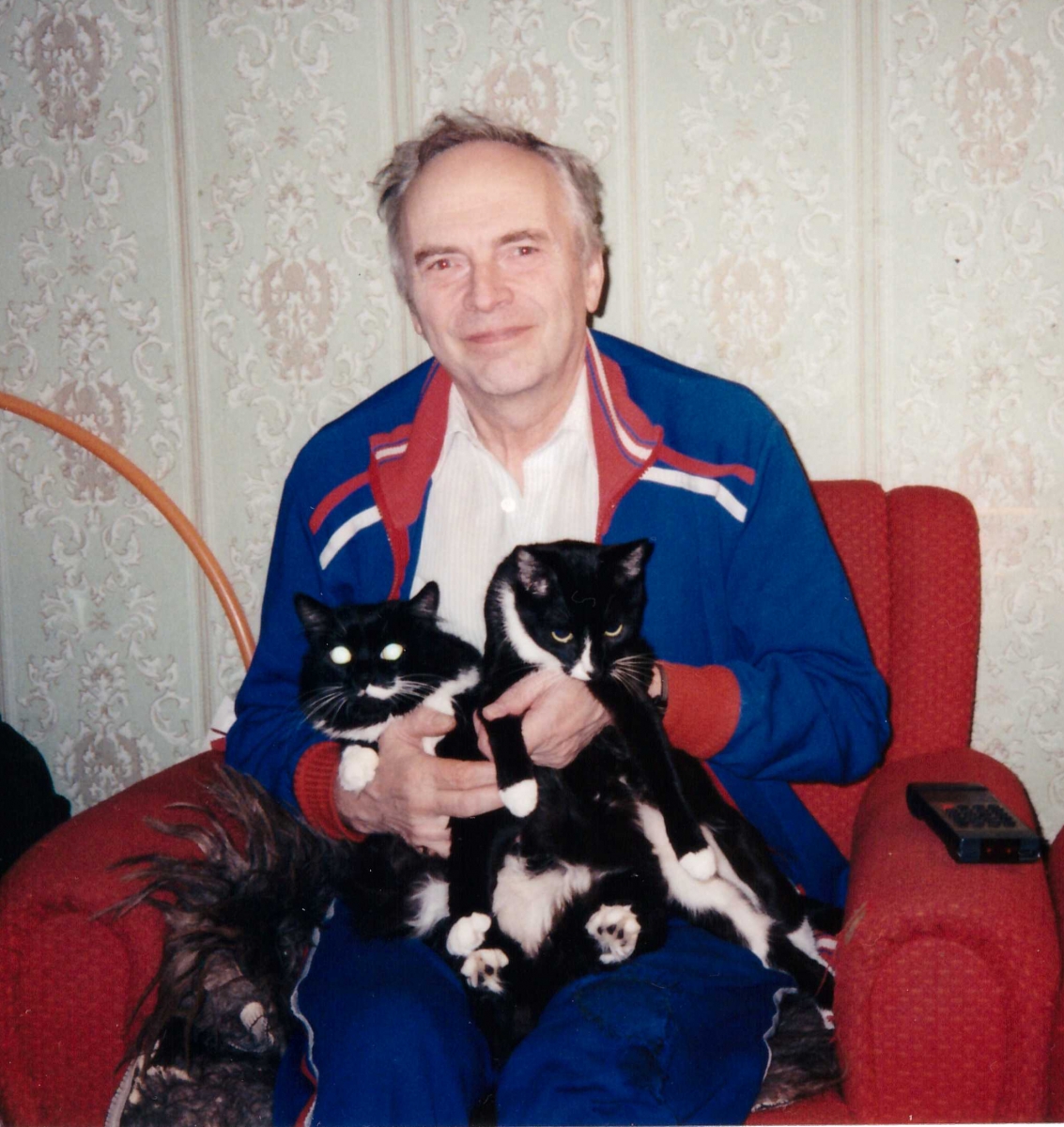 As the kittens grew, their distinct personalities emerged. And Scratchy never ceased to amaze us. She crawled out of the box to listen to people talking to each other and to contribute to the conversation with her confident "Mrrr? Ruuuu! ". As she was very affectionate, she never knew any cruelty, and she came up boldly to any visitor in the house, climbing into their laps and purring like a tractor at the slightest bit of attention. She got used to sleep on the bed and even under my arm, placing his head on my shoulder. Often she felt much like a sweaty tired human being...

When the kittens were about two months old, I started giving them away. There was no an Internet as we know it, I had to go to the subway exit and to stand there with a basket, accosting kindly strangers.

But I was stuck with the ugly kitten. So I made ready to  try again the next day. But when I put Scratchy in the same basket, and began dressing, I saw that she was crying. She was crying with real enormous tears. Sitting perfectly still, without trying to fight back, and looking at me with eyes dilated in horror.

How could I reject someone who loves me and wants to stay with me?

I let her go, she happily sped under the bed. I didn’t have to persuade my parents: her tenderness sunk into everyone’s soul. So she stayed with us, and by my father’s suggestion we renamed her Laska for her great tenderness. 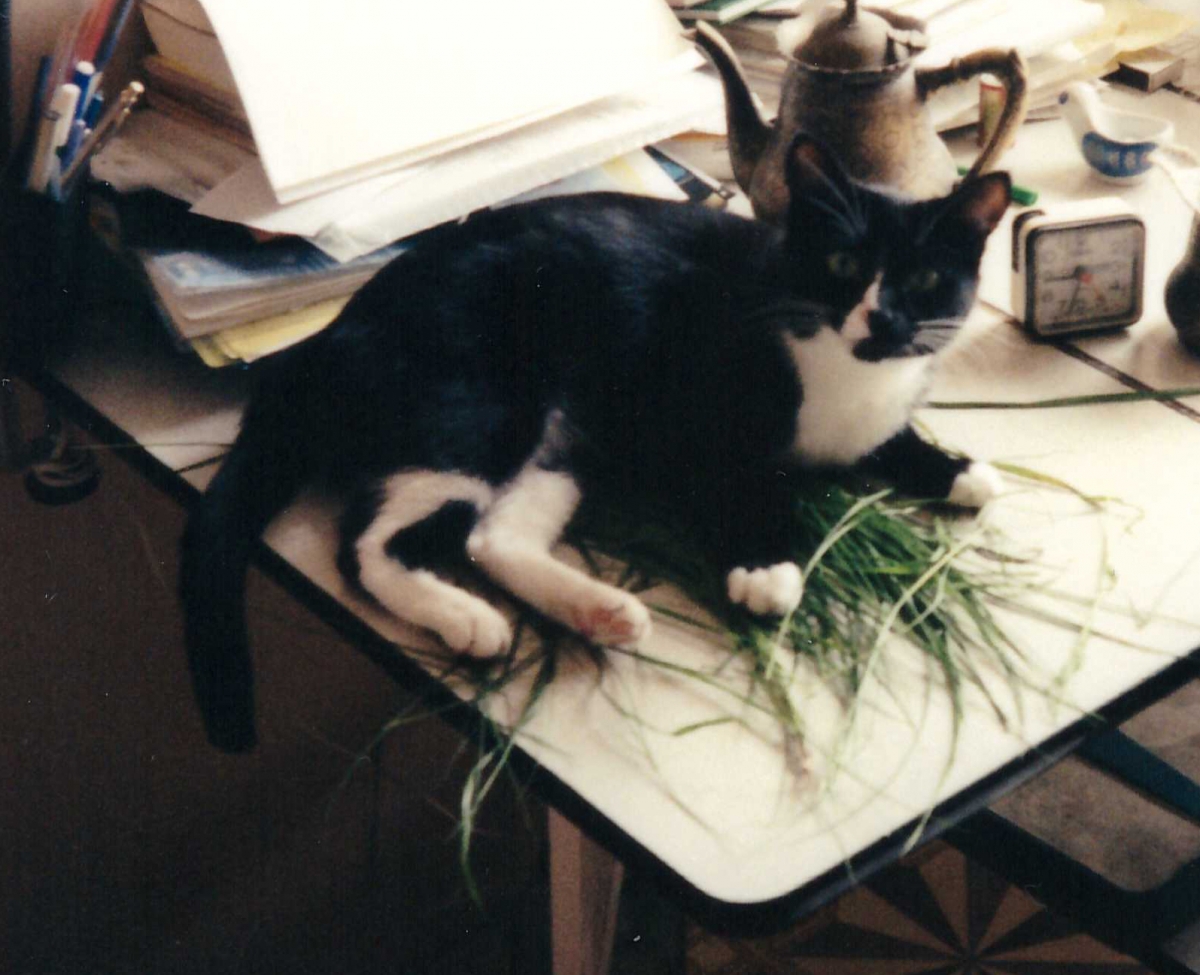 To wake up, to meet her in the corridor, and to pet her. To follow with my eyes as she made her rounds about the room to check for mice. To see her lick her lips and to understand what exactly she wanted to drink or to eat. Bringing her some herb from the garden, which she loved to eat. To call out loudly "Fish!" to make her come to the kitchen for the favorite food (she knew the word). To change the water and feed her. To dry some herb for her to eat this hay in the winter, when she wanted it. To share yogurt with her. To clean her litter box, praising her training. To play when she brought  some chew toy in her teeth. She was able to bring a paper ball for me to throw, and she would run after it and bringing it back to me.  To train her to jump from one chair to another. To clean the house with the cat balancing on my shoulders. To stroke her  in my lap, while sitting in front of the computer, if she got bored and needed some attention. To play with the mirror, giggling as she reacted to the reflection. Yes, she was not a dolphin or a monkey, and could  not fathom what witchcraft it is, and where is the room seen through the glass. I suspect that she could still recognize me in the mirror. 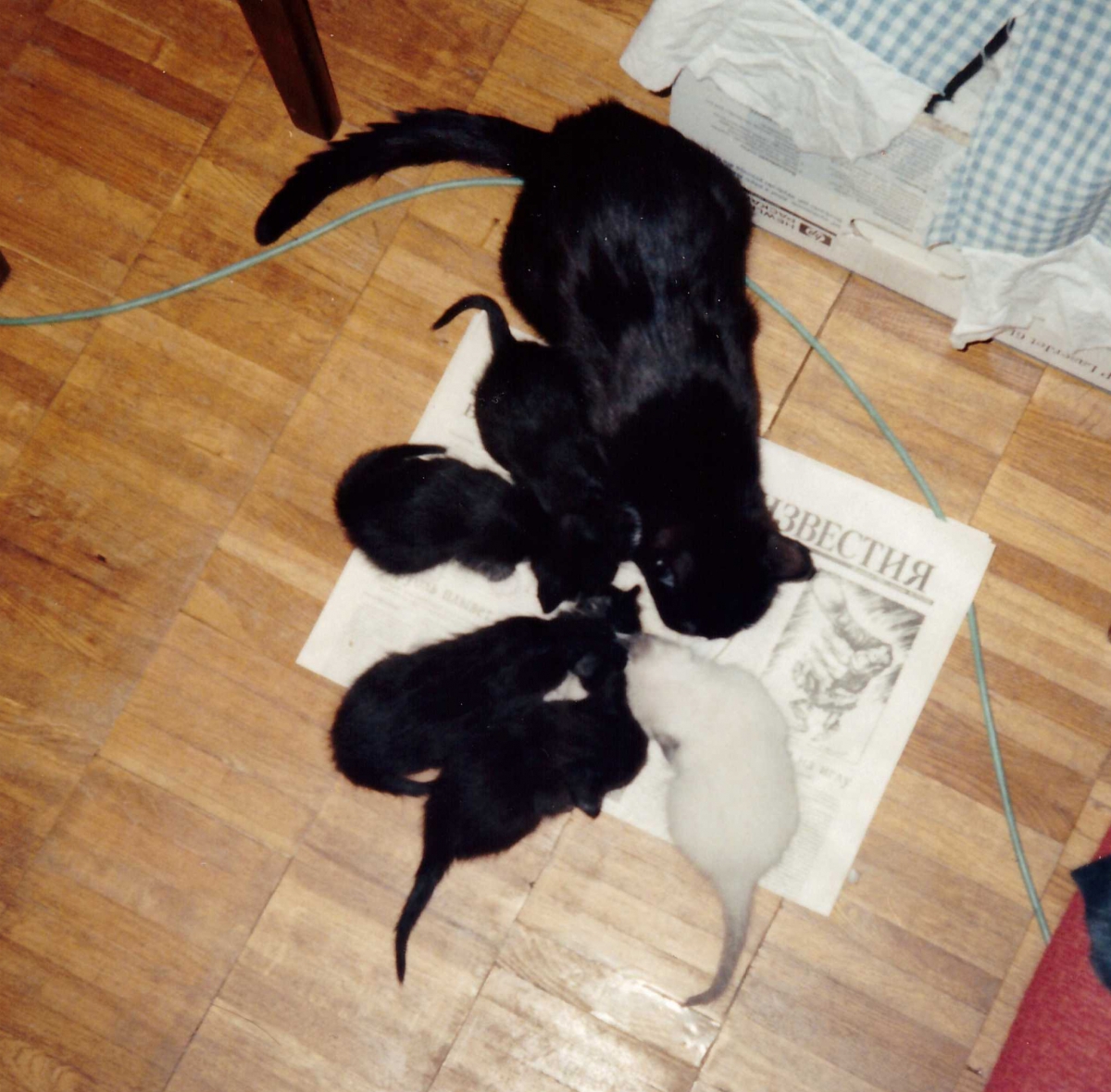 To guess that she has a stomach ache. To carry her to the vet, assuring  that I was with her and we will get through this. To carry her to have the injections, to encourage her, to explain that all this is necessary for her recovery. To celebrate the victory over gastritis.

To find her a mate and to rejoice over her kittens. Once again to wake up surrounded with warm lumps. To give away her kittens, sighing. To comfort her and to apologize. To win her back with treats.

To dance with the cat, paws  to hands, after passing my university exams. To burrow my nose into a warm fur and to cry if someone offended me. How much it was comforting! And to feel, contrary to all reason, that she always understood me, because she came rub herself on me, fondly gazing  into my eyes.

Time flies, you do not feel it until it manifests as symptoms of age-related disease of your beloved. The first bell sounded, when she was 19. Laska became less mobile,  laying down more and more, and entirely stopped to running. Her skin lost its smoothness and brightbess. There were more digestive problems. In winter 2015 I came to the understanding that  time was running out. She started to wobble when standing up and walking. And I realized that nothing would protect me from the prompt loss, and her - from total destruction in this world. Nothing except for cryonics.

I am lucky. I was familiar with the work of the transhumanists and KrioRus for more than four years. During this time, I read many different articles about innovative technologies. I talked to cryobiologists. I went to view the KrioRus cryodepository near Moscow. From my initial skepticism about cryonics I grew in understanding of its scientific basis, its potential, its importance for human life. An individual who decides not to submit to bereavement, by dint of will, can stand resolute between a loved one and death itself.

It took me about a week to make a decision and, with clenched teeth and with tears, i wrote to Valeria Pride via Skype: "I would like my cat to be cryopreserved". And I burst into tears of relief right after the agreement was reached.

It's hard to compare with something else this feeling when your complete hopelessness gives way to the preparation for the long run. To the temporary separation with hope for a happy ending. As if I was only seeing off sending a dear one abroad for a  very long course of treatment,  difficult and chancy, but still  hopeful for eventual full recovery and return from that long trip. 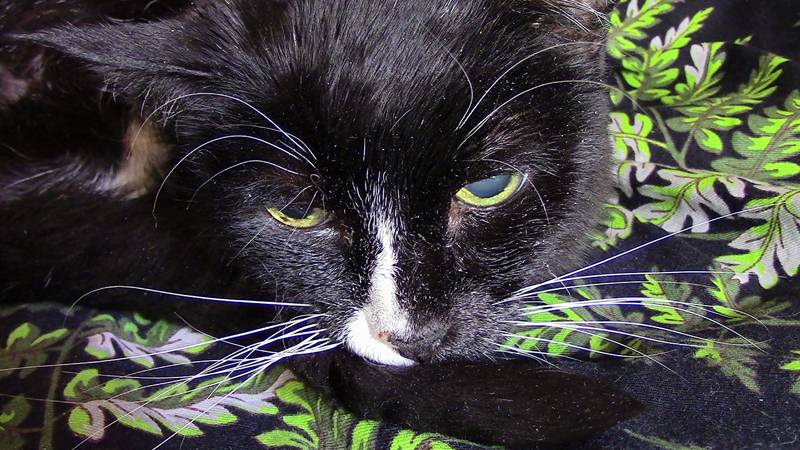 In early July, Laska began her decline, day by day. Seizures began. The vet told me that we only had a few days left  together. An injection of some vitamins and antihypoxants for palliative care, was all that he could offer. More effective treatment would begin with an MRI,  requiring first an injection of sedatives, likely fatal, given the condition of her heart, much as with human centenarians, for whom anesthesia is contravened.

For the next few days I took photos and shot videos, and I tried to prepare mentally. The hardest thing was to choose the exact moment. I was afraid to intervene too early, not to give her to live as long as she is able. But I didn’t want to put it off for too long, either. Her personality might be damaged by stroke. Deterioration might set in if she died in her sleep, or because of any other delays in the procedure. There could be brain damage or the blood clots obstructing injection of the cryoprotectant. And thus Laska who I know, with whom I have lived half of my life, would be lost forever.

There was another reason why it was necessary to euthanize her before natural death: the cryonics team needs to be at the ready.

I cannot blame people who delivered their pets to be cryopreserved in the night. I know what it takes to bear the suffering of a beloved pet. It is difficult to predict at what point it will become unbearable. Yet, if a plan is composed in advance, if the team is not distracted or delayed by any chance or routine personal business, and if the surgeon and his assistants are confident, well slept and steady of hand, the quality of the procedure will be much improved. And I wanted the best for my Laska. For the preparation of the team I should afford at least one full day.

So I had to bite the bullet once again, and to set the date. I promised to come on time and I did. Laska and Valerija finally met. My kitty, though she was  frightened by the trip, and weak with sickness, in her typical manner politely sniffed the hands of a new friend. Then, after taking a quick look around, she still climbed back into the bag. I did not bother to explain anything to her and simply asked her to trust me. I ran my  fingers through her fur, doing my best to commit the sensation to memory.

When everything was ready to begin the procedure, and the vet injected the anesthesia, of course, I was crying,  more and more, until Laska stopped breathing... I was next to her and stroked her hair to the last minute. When the heart stopped, I left. From now on everything depended on the efforts of the cryonics team.

And only late in the evening, when Valerija called me back at the end of the procedure and reported that all went well, there were no blood clots, the perfusion took place without any problems and the quality was good, I stopped  blaming myself for robbing Laska of her last few precious days. A great weight lifted from me. In exchange for these few suffering days of infirmity, she has gained a ticket to the future, a chance to wake up one day healthy and give me her surprised "Mrrr?" as if no more than a moment had passed. I'll await that happy day in impatient hope.

My father and my brother took my decision very casually. I was gently telling them about my plans for half of a year, trying to achieve if not consensus, then at least their understanding. My dad, as  a man that takes everything rationally, sighed, and concluded: "Well, at least she will serve  science". And he politely removed the empty cat dishes out of my sight...

Well, it was a long story, I'm tired of writing and I have drenched so many hankies... I have yet to release the medical data of my little sister to the archive of KrioRus, there are some videos and photos as well... But this story is also necessary - a person's memory is unreliable, and the scientists who will bring Laska back will need to know something about her personality and behavior, in order to  gage to what extent they were able to restore her memory and personality. And it is necessary for me to remember why I have spent so much effort for the sake of “an ordinary house pet ..."

There is nothing more natural than to protect our beloved ones.