MOSCOW — "I don't ever want to die... It wouldn't suit me," said Innokenty Osadchy. Fortunately, the 35-year-old investment banker is certain he has found a loophole out of death.

Osadchy is ready to pay a small fortune to freeze his brain until future technology allows him to continue his life -- after being transplanted into a new body and resuscitated.

"Why do I have to die in a couple decades? I don't see any logic in this," Osadchy told AFP. "It won't be another life, it'll be the continuation of my life. 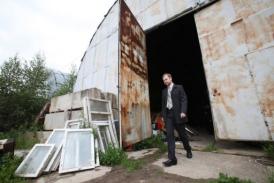 "I don't ever want to die ever. Not in a year, not in a million years."

Osadchy and other clients of Russian cryonics company KrioRus believe the brain operates like a computer hard-drive and its contents can be frozen and stored for the future.

"We know that the personality is stored in the brain. So when a person's body is old, there's no reason to keep it," said Danila Medvedev, who runs KrioRus, the first cryonics outfit outside the United States.

"We tell our clients it's cheaper, safer and probably better preservation just to freeze the brain," said Medvedev, a smart executive sporting a suit and an iPad.

Cryonics -- or the freezing of humans in the hope of future resuscitation -- is illegal in France and much of the world, but KrioRus has stored four full bodies and eight people's heads in liquid nitrogen-filled metal vats.

While a few are kept at home by their client's relatives, most are lumped together in containers at the firm's rusting warehouse, where an old desk now serves as a step to allow visitors to peer into the icy-mist where the bodies are stored. 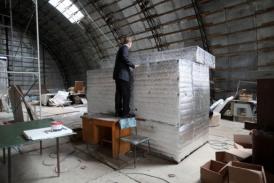 "You would just need to launch their hearts... then you have a person who is living again," Medvedev said, counting on the swift progress of nanotechnology and medicine to help reverse the initial cause of death.

"Once you can do that kind of nano-surgery at the cellular level... you can take a person from cryo-stasis; warm him up gradually and then he will be alive."

Since its 2005 launch, KrioRus has been building new vats, in anticipation of the 30 clients, like Osadchy, with whom it already has contracts.

The fee is 10,000 dollars for a brain freeze and 30,000 for the full body -- all upfront -- because, "when you have a person who is dead as your client, you set up to allow people to pre-pay," Medvedev explained.

"In the case of death, the only chance now is cryo-storage," Osadchy said. "It was always clear to me that vampires, heaven and hell, and everything godly and supernatural, wasn't real," he said.

But scientists at the Soviet Union's former premier cryo-biology institute, now in Ukraine, are full of disdain for the idea. 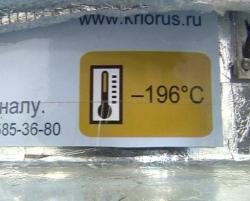 "They are cheating people, taking a lot of money: It's fraud," said Valentin Grishenko, director of the Ukraine-based institute.

"If you freeze a body today -- even one alive and healthy -- after it is defrosted, it won't be alive and whole. We can't even freeze and preserve organs today -- only cells."

In addition to the more obvious doubts over cryonics, KrioRus' practitioners tread some very fine ethical lines. Death, for cryonics subscribers, is not when the hearts stops beating.

"You are dead -- irrevocably -- when your brain is mush," said Medvedev.

Cryonics proponents therefore hope to freeze the grey matter as soon as possible after their "legal death" and even before that -- to drain the persons blood and pump in cryo-protectant solution.

In a stop-gap move, Medvedev helped Lidia's grandson put her brain on dry-ice, which he kept in his apartment for eight months until KrioRus got its first metal container. 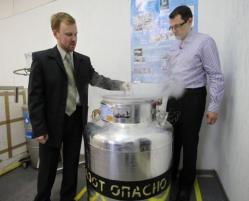 Cryonics backers may also freeze their relatives against their will.

While Osadchy's mother is a church-going Russian Orthodox, opposed to cryonics, he said he would not hesistate to remove her brain for keeping: "After death that person can't refuse."

Medvedev said cryonics' offer of eternal life may serve as consolation for those who lost loved ones to death.

"It's actually much better for psychology than anything else because death drives people crazy with sorrow. With cryonics they have something they can do to help," he said. "It's the lack of certainty that's important."

But he denied KrioRus was offering its clients false hopes: "We don't give guarantees, we say it be stupid not to try."

For Viktor Grebenshchikov, 52, one of the founders of KrioRus, it is quite simply the chance at another life.

"I love life, I think it's fun!" he said laughing. "I like women. I like to drink wine and play the guitar."

He freely admitted that his children laughed at his beliefs, but said: "If I die in a car crash tomorrow and there is even one chance in a million that I can -- by this means -- live again, then I'd be happy."