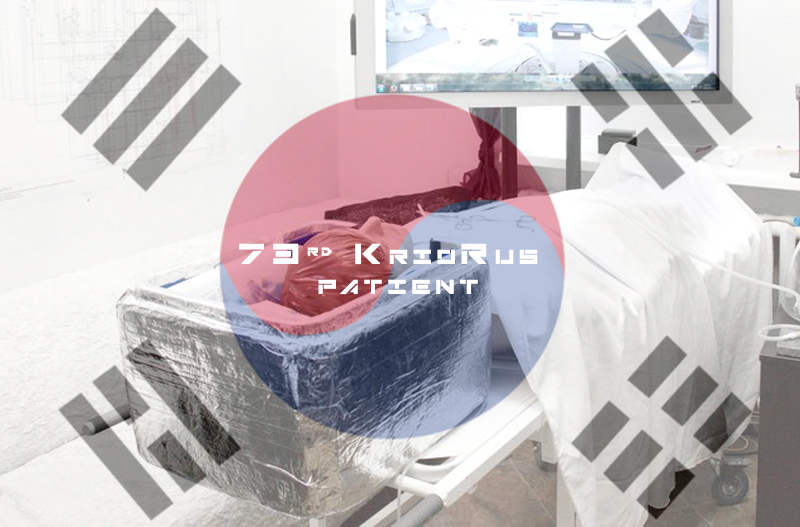 Our company receives many letters from different countries requesting to become our representatives, but we chose our representative very thoroughly. We simply cannot allow random people to deal with cryonics, people who come not to serve the idea of cryonics, but to get, as some people think, “easy” money. Our partners are people devoted to cryonics with all their heart and soul, they just like us understand that cryonics is a huge work first of all.

Among them there is Mr H. Han, whom we have known for a long time and who works for KrioAsia in Seoul, South Korea. He contacted us in 2016 for the first time as back then he wanted to represent our services in South Korea. In 2017, KrioRus and KrioAsia signed a partnership agreement.

On 6 April 2020, a man contacted KrioAsia as his mother Ms J. Ban died on 4 April from lymphoma. The client had previously contacted Mr H. Han. The first time he contacted KrioAsia a year ago, when his mother’s condition was critical, however, the contract was not signed, as the woman felt better. Unfortunately, as it is often the case when the contract is not signed in advance and actions are not taken in accordance with the agreements made in advance, the time for perfusion was already lost, since the woman died 30 hours before client’s second call to Mr H. Han. At this point, blood clots form in the vessels, the circulatory system loses its elasticity and therefore it is not possible to carry out perfusion through the circulatory system.

According to our experience, it happens in about 30% of cases, however, this does not mean that you do not need to save a person, because if you act promptly, you can save the cryonics patient with sufficient quality, which will be enough, as we believe, for successful revival in the future. We believe that in the future, the latest technologies will be able to help all cryonics patients, including those who were not cryopreserved with the highest quality. Perhaps the only thing that will differ is the order of revival. The most important thing is to avoid the so-called “informational death”, that is, it is necessary that neurons and neural connections remain intact in the brain of a cryopreserved person or can be traced using high-quality scanning technology.

Mr H. Han gave our explanations to the client who, as we have already mentioned, had been interested in cryonics for a long time and understood that his mother should be saved by all means, so he agreed. By the way, Ms J. Ban also knew about cryonics and agreed with this idea.

For a very short time after death, Ms J. Ban was placed in a freezer and stored at a temperature of –20 ° C, so her body was instantly cooled and frozen. After Mr H. Han started to search for a company that could transport the body of a frozen person in conditions of limited air traffic between Russia and South Korea due to the coronavirus pandemic. We began to issue all the necessary documents for transportation. Mr H. Han had studied all the offers available in South Korea and chose the AirBridgeCargo company.

AirBridgeCargo is a Russian scheduled cargo airline, a leader in the Russian air cargo industry and one of the largest international freight carriers.

All this time we gave detailed instructions and advice to our partners from KrioAsia. The airline managed to find a place to transport Ms J. Ban on a diplomatic cargo flight. It was a great luck.

On 28 April 2020, KrioAsia started to prepare for the flight. Mr H. Han bought dry ice and gel packs. In total, 30 kg of dry ice and 50 kg of pre-cooled gel packs were required for transportation.

On 30 April 2020, Ms J. Ban’s body was loaded onto an AirBridgeCargo ‘s cargo plane in Seoul and sent to Moscow. The cryonics patient arrived in Moscow on the morning of 1 May at the second terminal of Sheremetyevo Airport. 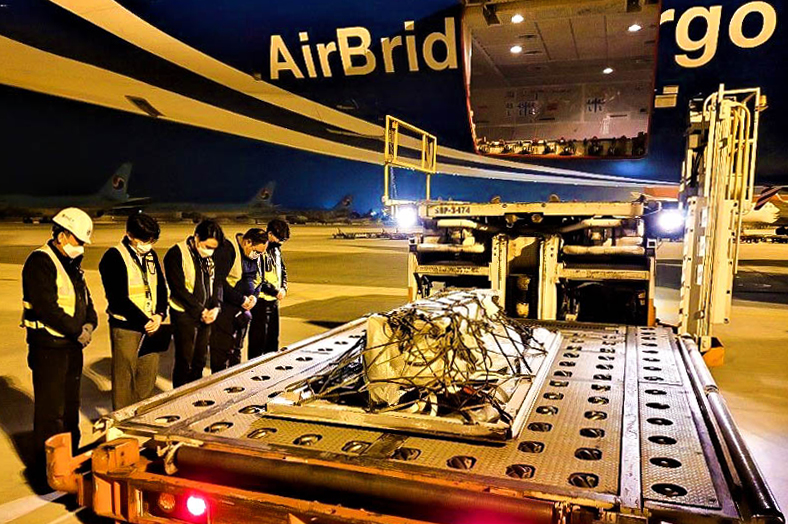 It should be noted that the arrival of the body of a cryonics patient from abroad does not mean it would be handed to us immediately. The issuance procedure consists of the following steps: the body of the cryo-patient arrives, the carrier company or the customs service receives it from the plane (in our case, the body was immediately placed in the freezer in a special warehouse), then the customs clearance procedure begins. Often this procedure lasts 6 hours. In our case, we managed to get the body less than 4 hours after the arrival of the aircraft. This is a great time even for Russian patients, and even more for overseas transportations, where the delivery time, as we have already mentioned, is usually 6 hours. The temperature on the cryonics patient’s head surface was low and amounted to -75.8 °C.

At 09:00, our specialists took the body of Ms J. Ban to the cryonics facility. When transporting to the storage, additional cold elements were used to maintain a low temperature. At 14:00, the body of the patient was placed in a new dewar with a small amount of liquid nitrogen for cooling in liquid nitrogen vapors. So, our cryopatient arrived at her “new home ”for permanent storage to wait for revival in the future. 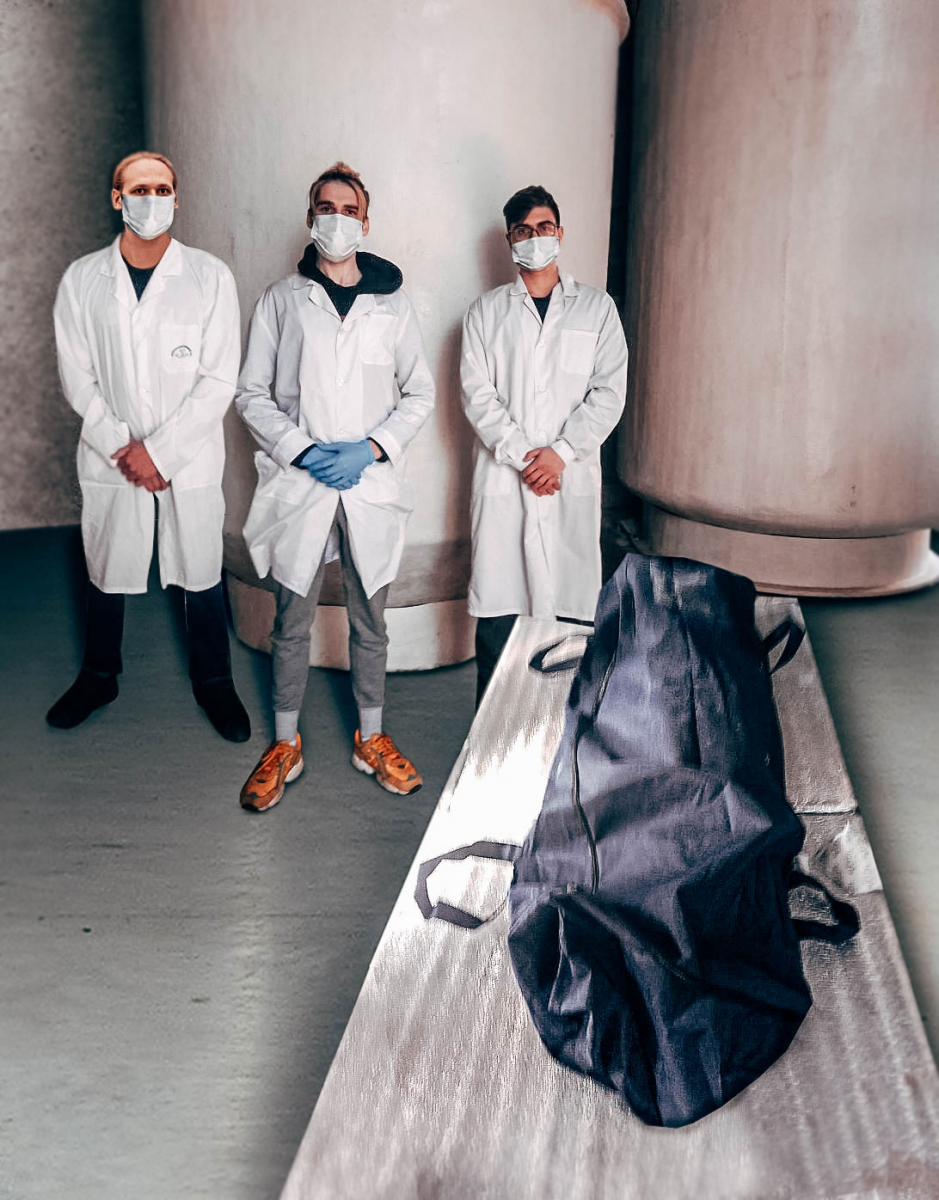 Thus, despite all the difficulties caused by quarantine measures, thanks to the most coordinated actions of KrioRus, KrioAsia and the client, it was once again proved that there is nothing impossible in saving lives. Now, Korean customers can be sure that the transportation process from this country is developed, and KrioAsia, and in particular Mr H. Han, have shown their effectiveness. We are very pleased with the work done and thank everyone who contributed to it! We wish KrioAsia and Mr H. Han further success in developing cryonics! 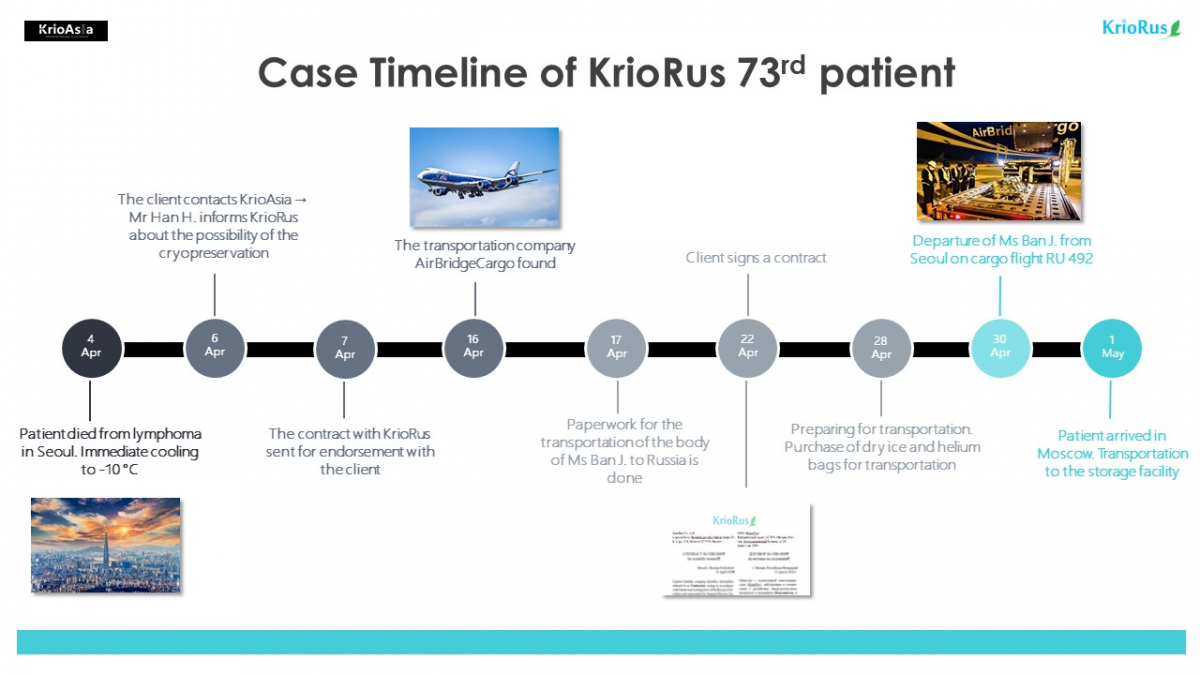