On the 27th of July 2011, Olga Aleksandrovna Visheva was cryopreserved. She was the wife of our friend and famous philosopher immortalist Igor Vladimirovich Vishev. Olga Vladimirovna became 17th person to be cryopreserved in the Russian Federation.

The Vishevs signed cryopreservation contracts in spring 2009, after scrupulous research of the whole field. It came to be the natural and logical manifestation of Igor Vishev’s and Ol 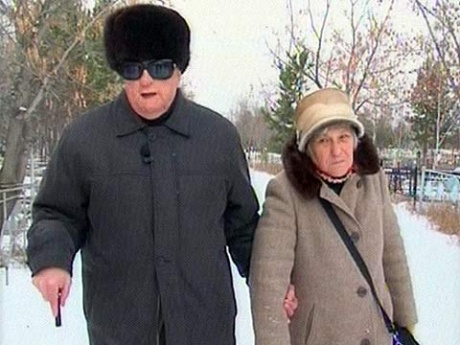 ga Aleksandrovna’s beliefs. Igor Vladimirovich became blind when he was 14 years old, after an accident. He met his wife when he was a student at university. She became his eyes, and, for life, his "other half".

On the 26th of July 2011, while the Vishevs were on vacation at their house in Rasturguevo near Moscow, Olga Vladimirovna suddenly felt ill, and died shortly thereafter; she had heart disease.

For KrioRus, this case was a challenge. It was necessary to react very quickly after Igor Vishev's call, and at that time we did not even know that Vishevs had come back from Chelyabinsk, where they live permanently, to their house near Moscow. Vishev did not have with him the original copy of the contract signed two years ago by Olga Visheva to show it to doctors and the police officer, and he did not have ice in the freezer. Only after 5 hours was the body of Olga Aleksandrovna covered with ice. There had been different legal and administration issues, not very important from cryonics technical point of view, which prevented earlier intense cooling measures.

But from that point on, the program of cooling became very stable. Even so, only after 24 hours following biological death of the patient was the perfusion executed and the brain of Olga Visheva was placed in dry ice. At the time of writing this report, its temperature is lower than -100 ºC.

We were friends with Olga Aleksandrovna; she was coming to visit us in our office, and even took a ride on our segway. Now she is a KrioRus patient. We are sorry that this extraordinary, dedicated woman now is not able to help Igor Vladimirovich to write articles, send it to print offices, develop Immortalism, and just communicate with friends and her son. To breathe, to smile. But, Olga Aleksandrovna will now have unique chance for new, second life in the future. And we, cryonicists, do not have other options except to make cryonics successful, to save people, and, over the course of time, to further the development of scientific research and technological processes for restoring cryopreserved patients to healthy life.

Rest peacefully, Olga Aleksandrovna. Now it is our turn to fight for immortality.