Our 58th Cryonics patient. KrioRus always keep the promise, despite the hardship. 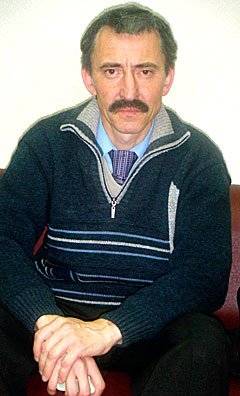 On January 29th, KrioRus cryonically suspended our friend, gerontologist, Alexey Lomzhev. It is a sad moment for all of us. We believe that in the future it will be possible to revive our patients. But for many decades this people cannot be animated and create a future with us.

We’ve met Alexey in 2005. He was a humble, calm, always fit, intelligent medical doctor, neurologist. Occasionally, he would come to our Moscow Transhumanist Movement Seminar. I remember very well the event during the summer of 2009, when some 20 people went on suburban house of a great Russian philosopher and immortalist Igor V. Vishev. And for the purpose of demonstration of Cryonics abilities we took a single hair and cryonically preserved it, so at least some DNA of every person present there, including Alexey Lomzhev, now will be saved. Later Alexey came to our Moscow seminar and we have met on many other similar events. He was constantly looking into different possibilities to stop and reverse aging with modern medicine and pharmacology as well promoted antiaging ideology to his friends. He called himself “The first practicing anti-aging gerontology doctor”. Alexey was born as a scientific immortalist. He never accepted the idea of death and I was always excited about his efforts to preserve his grandpa’s body. It was in the middle of 90’s and there was no cryonics company in Europe or Asia, so Alexey kept the body in the container of formaldehyde in a cemetery. This story is indicative us of Alexey’s determination and deep belief that death is an evil and humans need to stand up against death with all means possible, so he did all he can at that moment. He considered getting himself Cryonics contract, but Kriorus did not pushed him because he was pretty young and healthy.

Alexey lived near Vologda, around 600 miles north of Moscow and another tragedy happened in his family – his son drown to death in the river. Kriorus, Russian Cryonics company, did his cryopreservation despite the difficult situation. Later on, Alexey asked to sign a cryoneuropreservation contract for himself or his father, pretty old men, whoever will die first. At some point, around one year ago, Alexey's friends told us shocking fact that Alexey is in prison in connection with pension data manipulation. He got enormous sentence term of 8.5 years. Considering terrifying conditions in Russian prisons, this was not a correction term, it was more like planned postponed execution. Unfortunately this prison sentence was not conditional. 3 days ago, on January 30, 2018 his daughter called us and told that Alexey was killed in custody 16 hours ago and now is in morgue’s refrigerator. Considering the distance between Moscow and Vologda cities, and the time needed for the commute we could not do our normal perfusion procedure. Meanwhile we have sent there an equipped transport and spent around 18 hours on a road to bring Alexey to our Cryonics facility in Moscow region and do brain perfusion and neuropreservation. All that time Alexey stayed in cold temperatures, mostly because of favorable weather conditions.

We are really grateful to Alexey’s daughter, who helped a lot and Kriorus employees Ivan and Sergey for the descent perfusion and 24\7 availability.