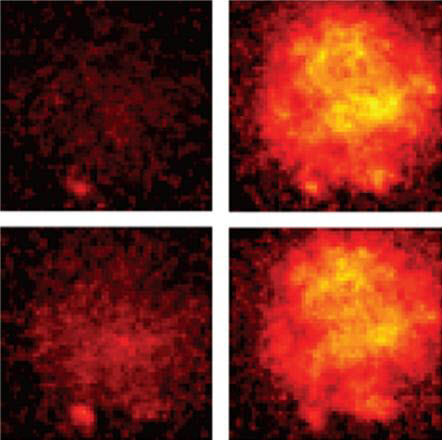 A series of images from a Duke engineering experiment show voltage spreading through a fruitfly neuron over a matter of just 4 milliseconds, a hundred times faster than the blink of an eye. The technology can see impulses as fleeting as 0.2 millisecond — 2000 times faster than a blink. (credit: Yiyang Gong, Duke University)

Researchers at Stanford University and Duke University have developed a new technique for watching the brain’s neurons in action with a temporal (time) resolution of about 0.2 milliseconds — a speed that is just fast enough to capture the action potentials in mammalian brains in real time for the first time.

The researchers combined genetically encoded voltage indicators, which can sense individual action potentials from many cell types in live animals, with a protein that can quickly sense neural voltage potentials with another protein that can amplify its signal output — the brightest fluorescing protein available.

The paper appeared online in Science on November 19, 2015.