The Cryonics Institute now has two computer-controlled cooling boxes, a large one for human patients and a small one for pets & testing. These cooling boxes are designed to bring the temperature of patients or pets from above water-ice temperature after perfusion to liquid nitrogen temperature for long-term storage. The use of vitrification solution for perfusion mandates rapid cooling before solidification temperature (Tg, near minus 120 degrees Celcius) to prevent ice formation. There should also be slow cooling below solidification temperature to liquid nitrogen temperature to prevent or minimize cracking. Other circumstances or testing may call for other cooling profiles. Our computer-controlled cooling boxes give us the ability to control cooling rates with some precision in any temperature range (with minimal manual supervision), and to log the temperature changes that actually occur so that cooling curves can be generated and studied.

We have previously done cooling with the patient above liquid nitrogen being cooled by gradual lowering toward the vapor - after initial cooling in dry ice. With the vitrification protocol initial cooling needs to be faster, so we had placed a fan on the liquid nitrogen box. Computer control allows for more precise cooling rate and the automation provides relief from the demands of manual cooling.

The computer-controlled cooling box systems have been created by the joint efforts of Marc McMaken (a cryogenics engineer who owns a local cryogenics processing company,HR & D, LLC), of Mike R (a LabVIEW programmer who works for Wineman Technology, Inc), and of Andy Zawacki & Ben Best (me) of the Cryonics Institute. Andy built the large cooling box, initially for shipping and now customized for cooling. I provided the initial specifications for the boxes and controlling software. Marc McMaken built the small cooling box and provided the controlling hardware for both boxes. 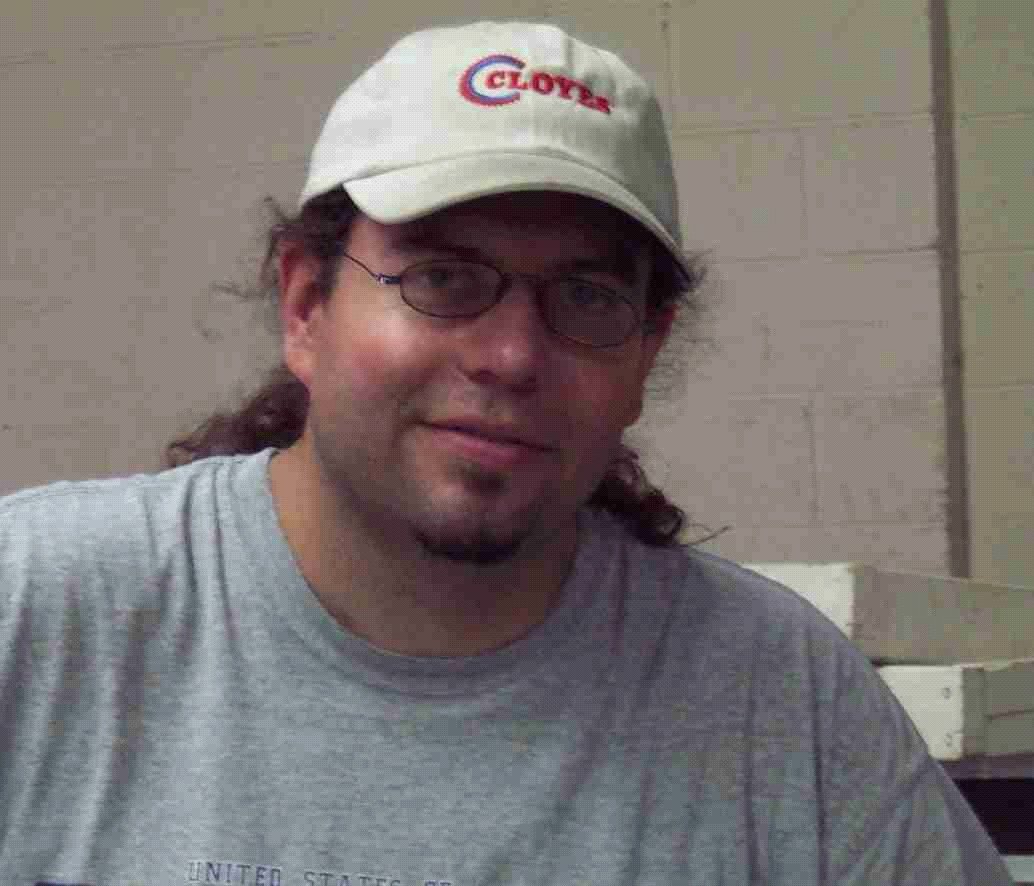 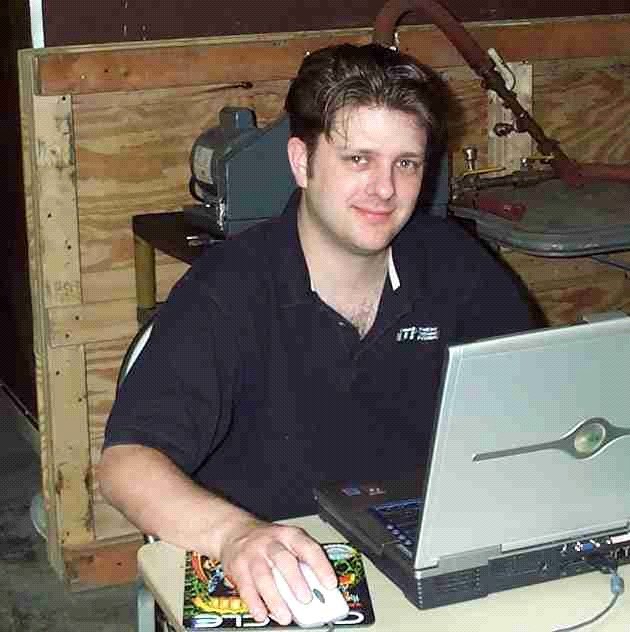 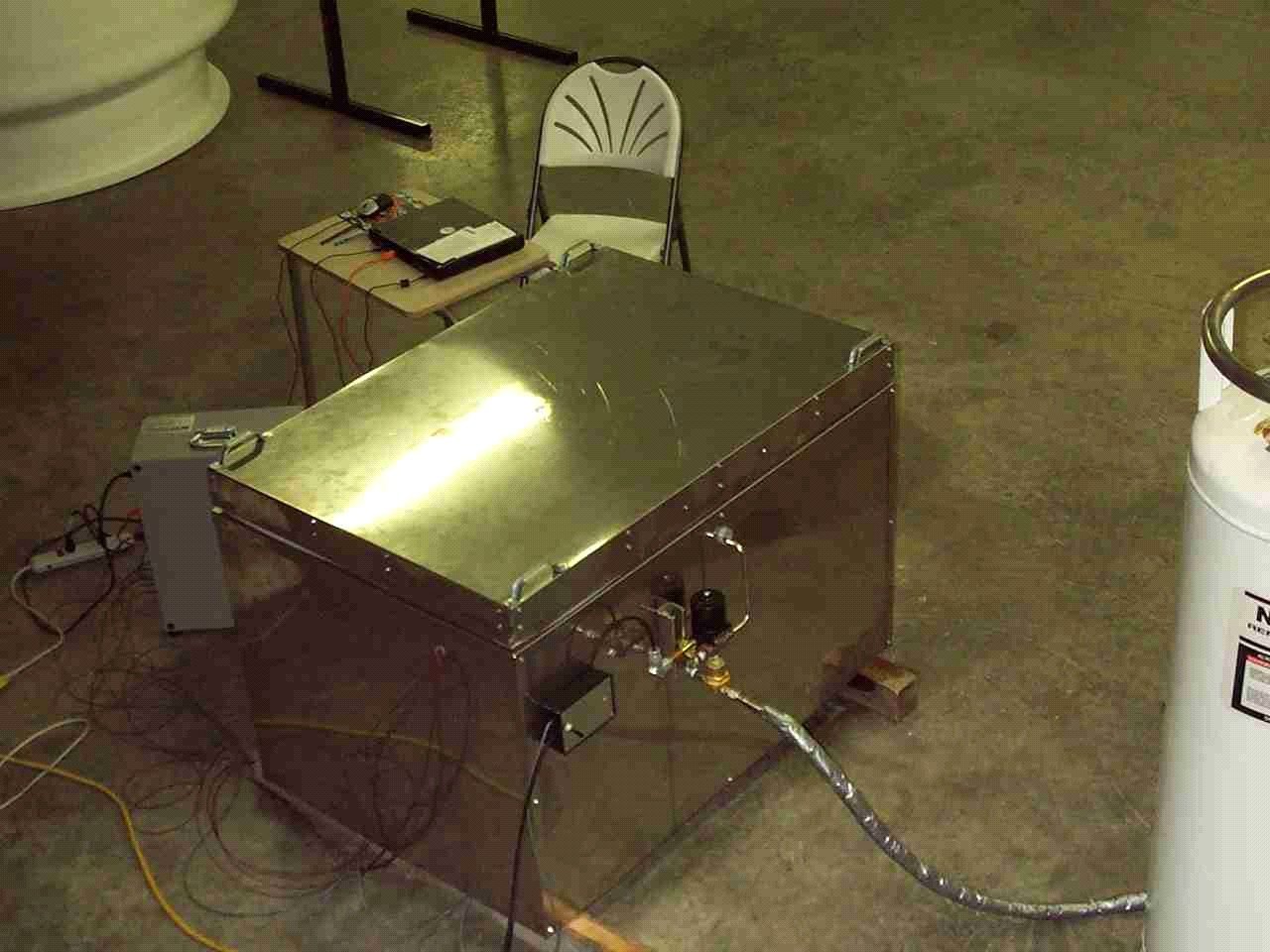 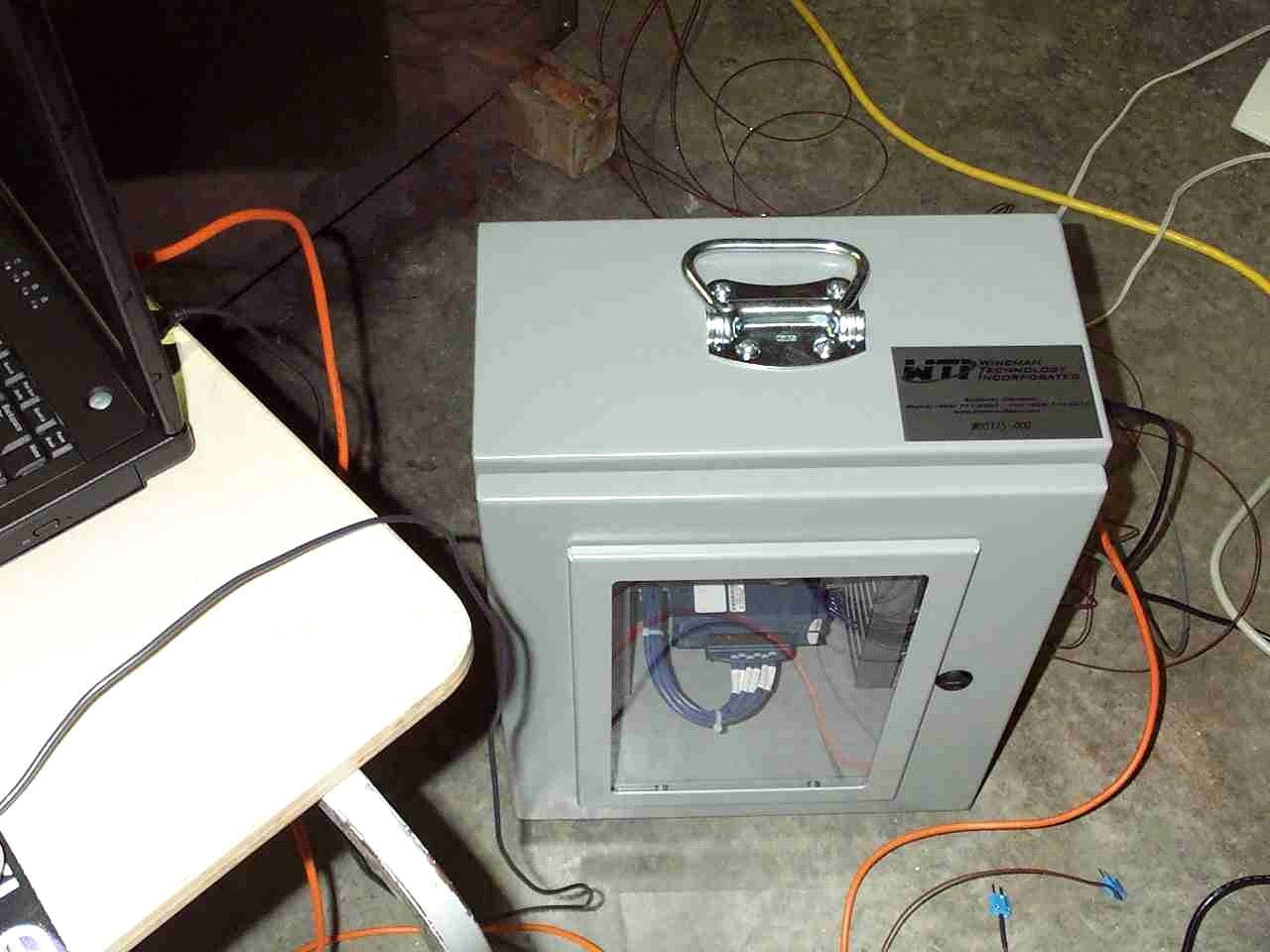 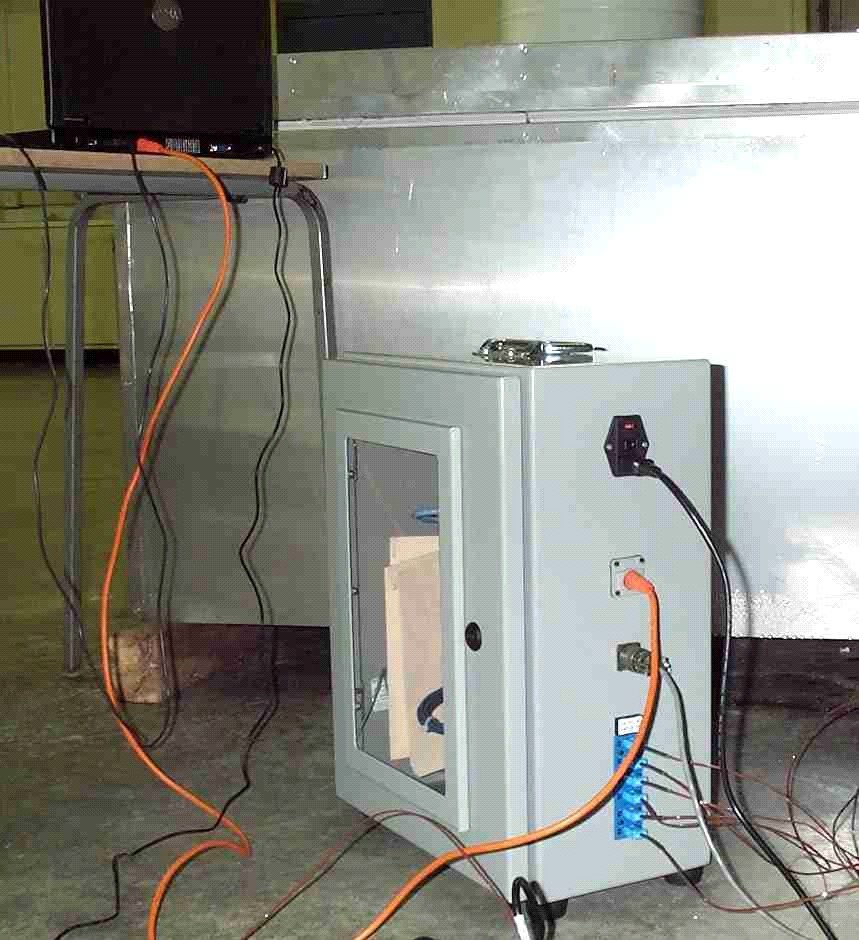 The signals received from the computer controller are based on temperature readings received from a thermocouple in the cooling box that has been placed in the patient or on the test object. We use T-type thermocouple beaded probes which have an operating range of −200ºC to +350ºC. 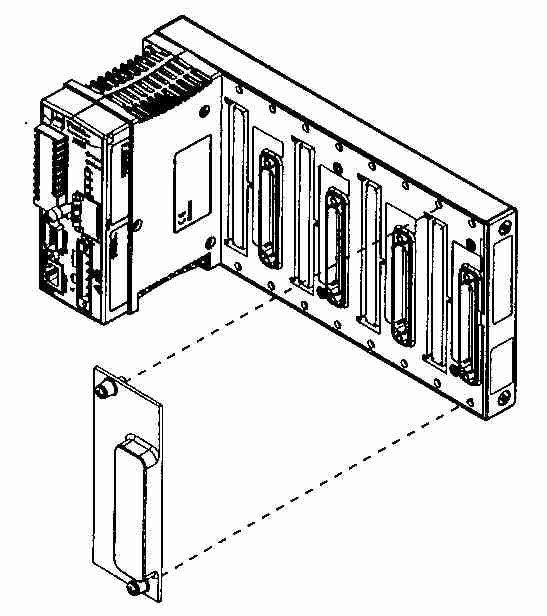 The "computer controller" is actually a combination of a control box and a laptop computer. The control box contains the power supply that converts 120 volt AC current to 24 volt DC and supplies a 0.5 amp current to the other components on the backplane. Fuses would blow if current reached 1.5 amps. A green ground wire (common) connects all components. Ducts run along the sides of the backplane to keep the wiring orderly. 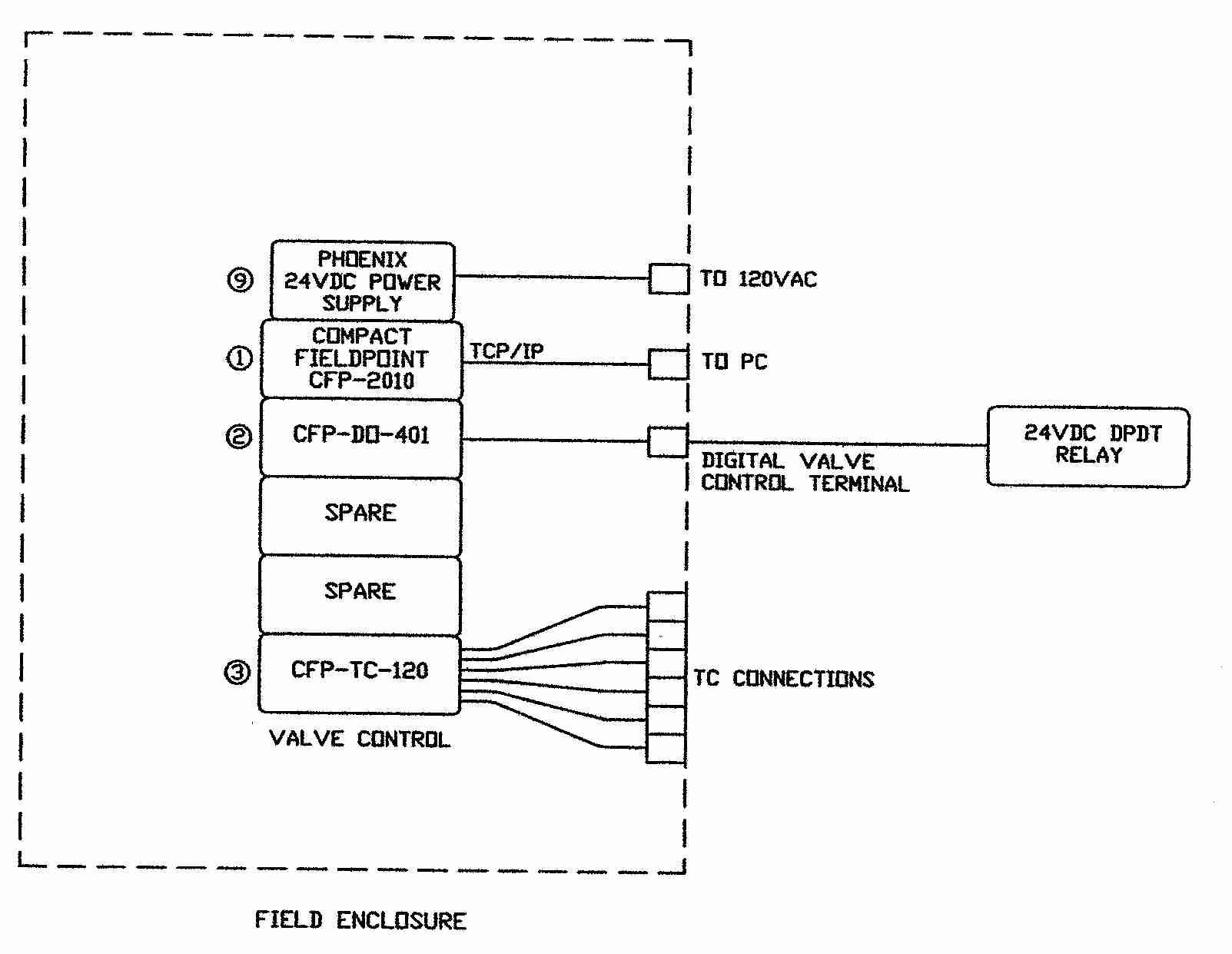 In one slot is the Digital Output module (cFP-DO-401) which sets the output line to 24 volts upon receiving signals from the controller. In another slot is the ThermoCouple module (cFP-TC-120) which receives input from up to six thermocouples and transmits that information to the controller. The wires in this module are specifically matched with the metals in the T-type thermocouples. Both modules have adjoining Connector Blocks (cFP-CB-x) to handle the actual wiring. The cFP-CB-1 is used for the Digital Output module, whereas the cFP-CB-3 is more suited for the ThermoCouple module because it has more accurate cold-junction compensation -- compensating for the thermoelectric voltages generated at the junctures.

The configuration screen on the laptop allows the operator to program a sequence of cooling steps, where each step specifies a target temperature. The rate at which the Magnatrol valve opens and the duration of the valve opening is determined by calculations in the computer based on the specifications in a cooling step and the temperature of the controlling thermocouple. The operator can manually override the preprogrammed step at any time -- opening and closing the Magnatrol valve by clicking on an icon. A cooling curve will be displayed on the computer screen, which can be saved for future examination or for printing.

An example of a sequence for cooling a patient from water-ice temperature to liquid nitrogen temperature might be the following: 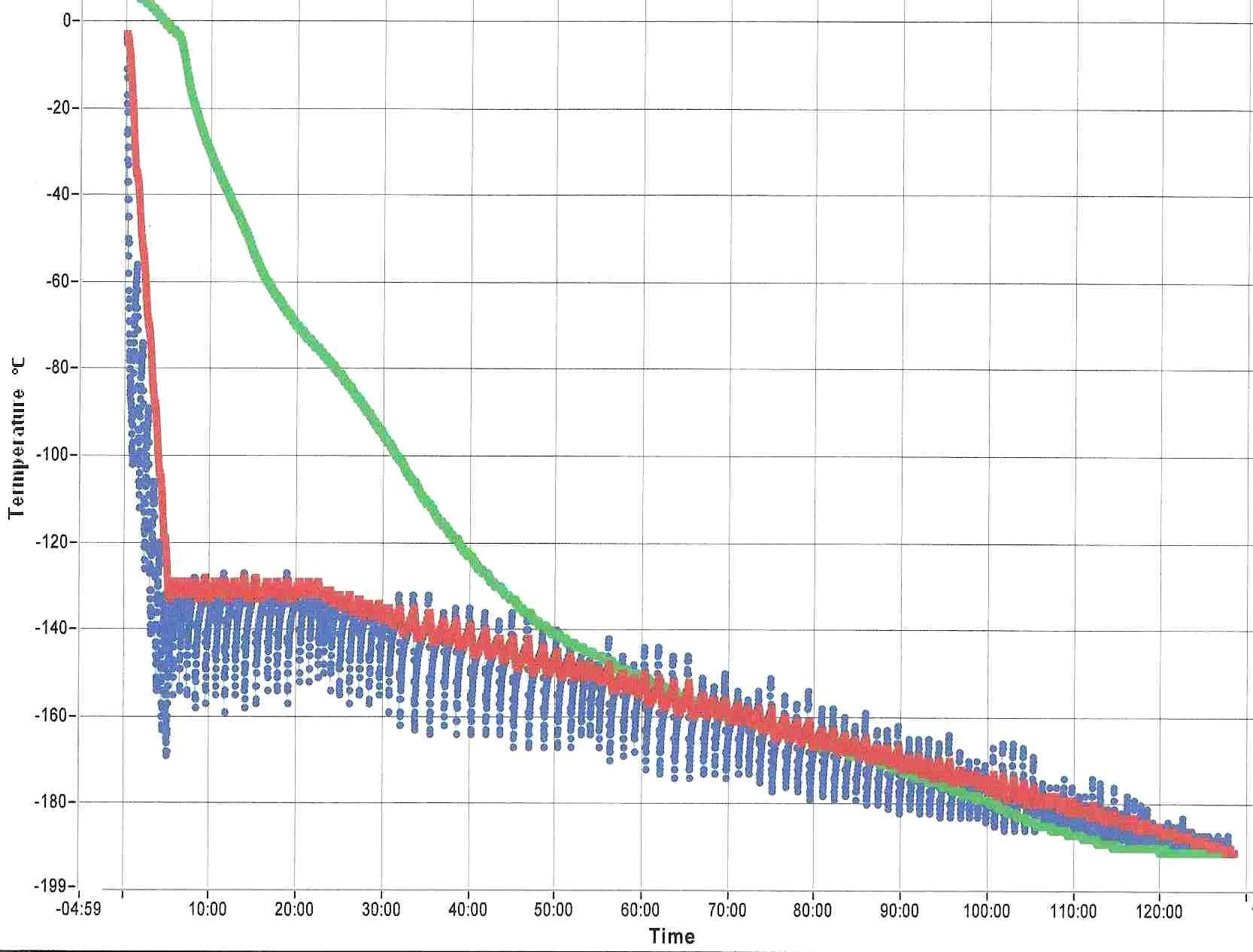 With each cryonics patient we treat, we learn from the experience and are thereby improving our equipment and methods. The cooling of the 72nd patient is the best we have done so far, but what we have learned from this cooling will allow our next vitrification patient to be treated with a better protocol. The above representation shows a somewhat idealized cooling curve, although this too will be improved-upon. 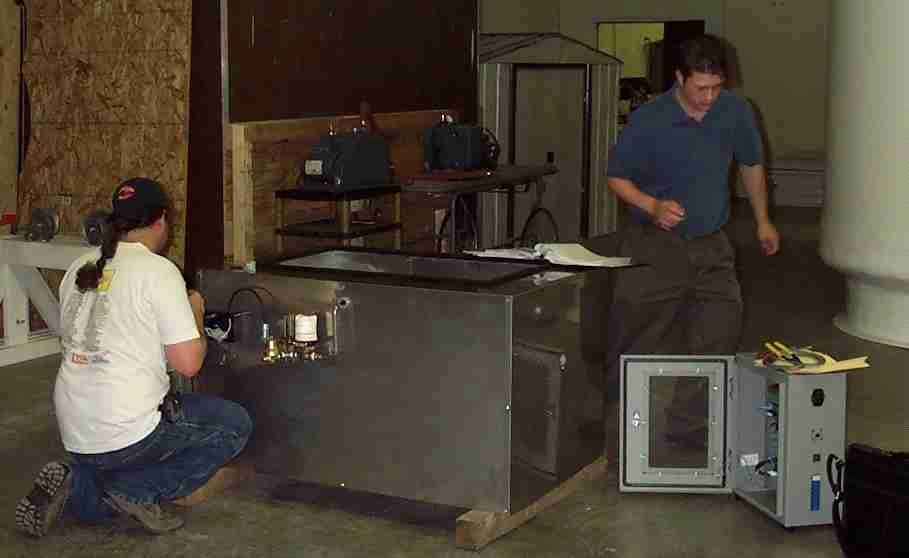 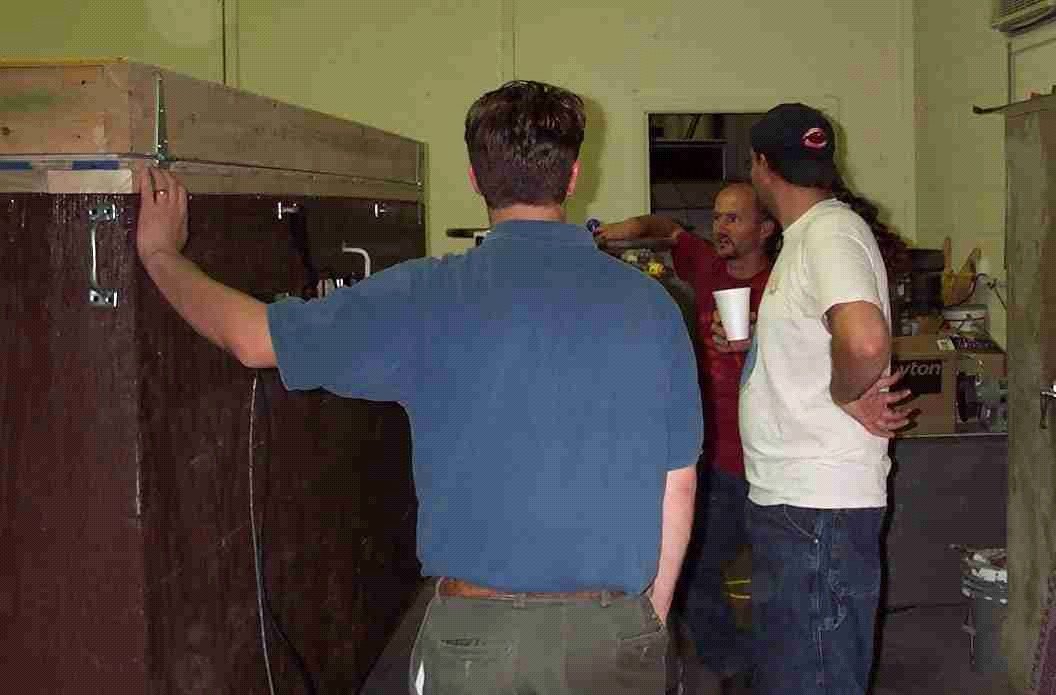 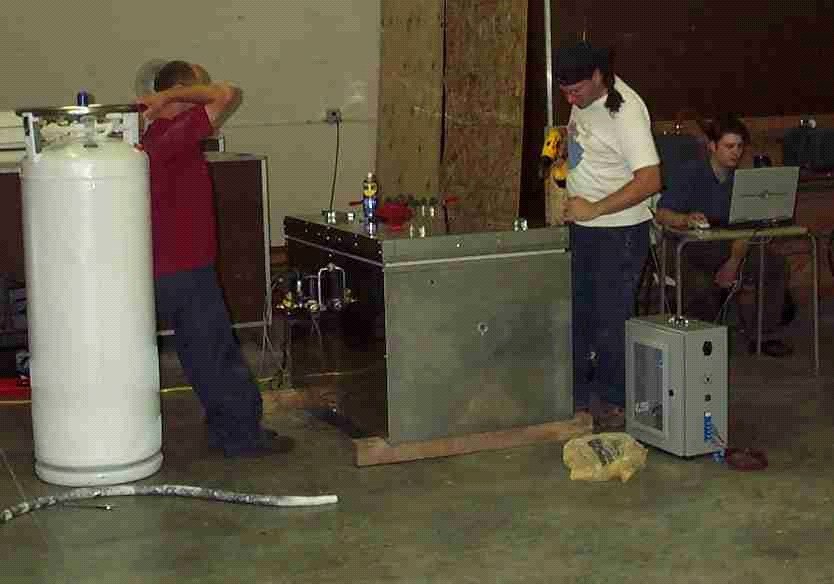 Mike, Andy and Marc discuss the big cooling boxт     Marc and Mike hard at work while Andy shoots the breeze 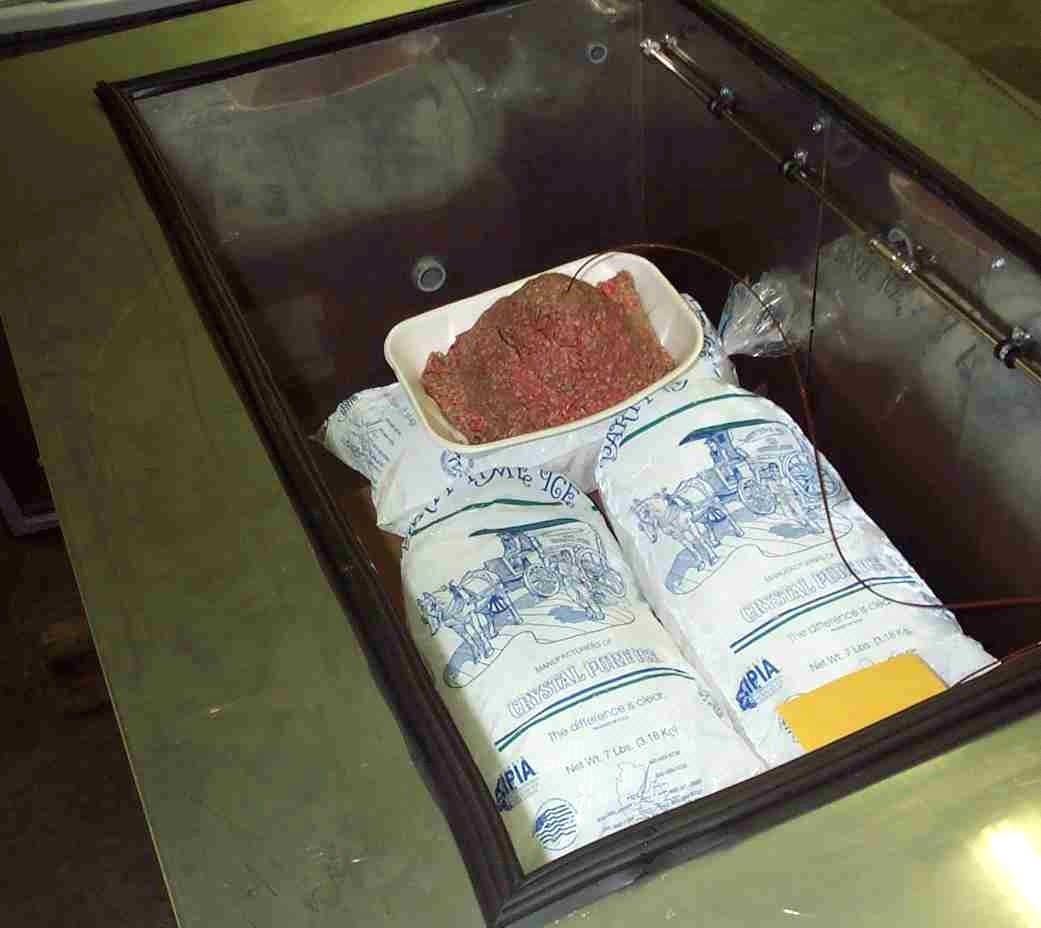 The Test Patient is a Meathead            Mike works on software while Curtis,  Henderson watches 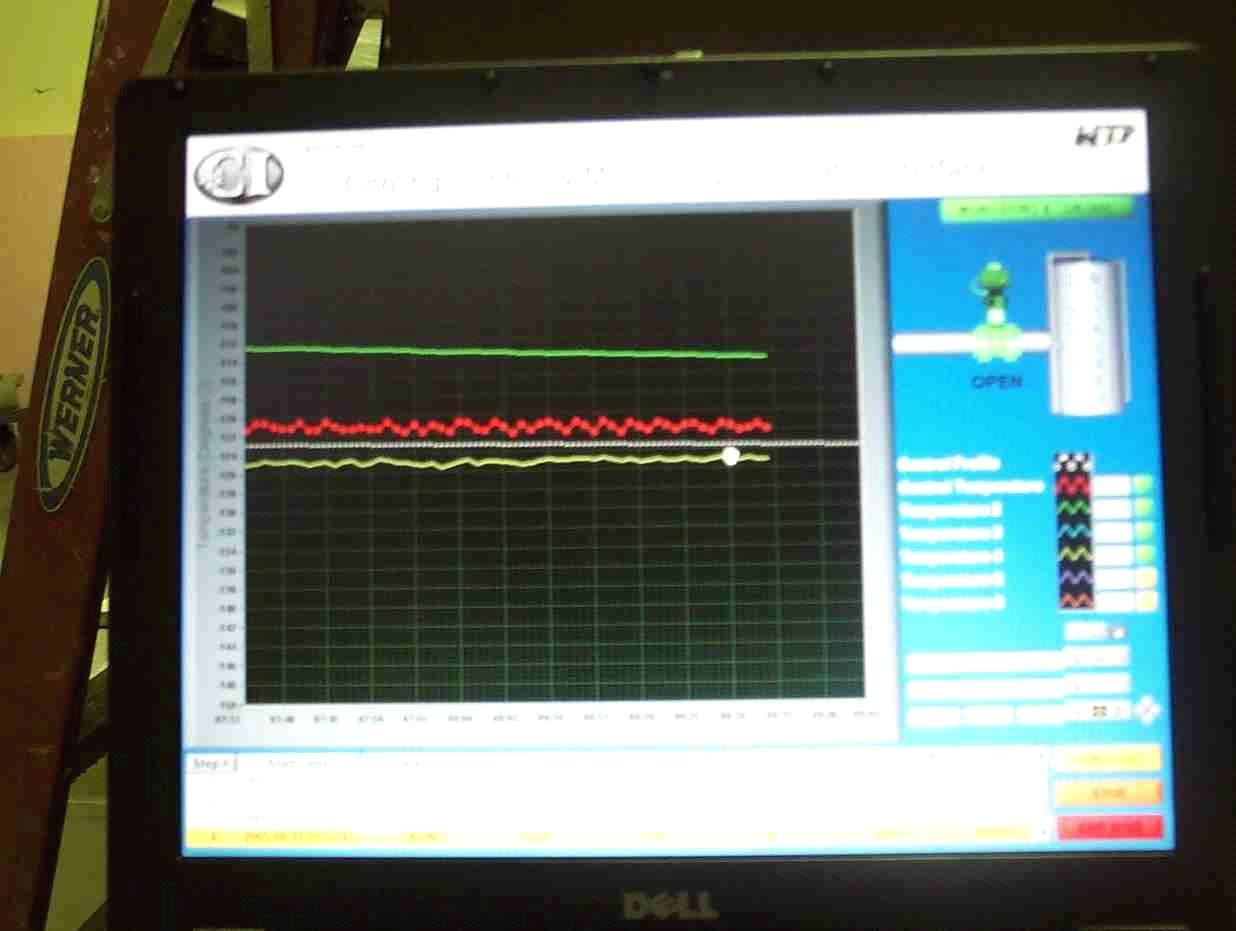